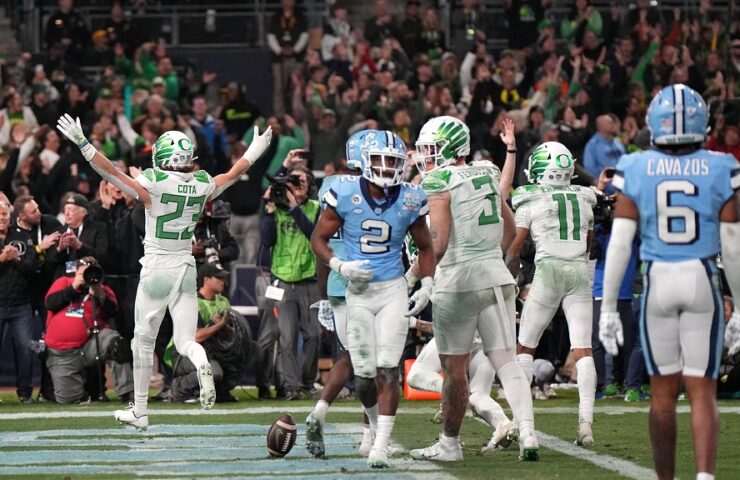 Oregon beat North Carolina 28-27 to win the San Diego County Credit Union Holiday Bowl. What happened, who was the player of the game, and what does it all mean?

Oregon 28, North Carolina 27 San Diego County Credit Union Holiday Bowl What Happened, Player of the Game, What It All Means

– A bit of a ragged game got amazing late. Oregon’s Bo Nix found Chase Cota for a six-yard touchdown on fourth down in the final seconds to tie it at 27, but the drama kicked in with 1) a review on the TD as Cota was dragged across the line and 2) the Camden Lewis extra point hit the upright and bounced through.

– Oregon got Bucky Irving touchdown runs from two and 66 yards for a 14-7 lead, and then it was all North Carolina for a while with 17 straight points for a 24-14 lead in the fourth. The two teams traded field goals before Nix led the way for the game-winning scoring drive in the final moments.

– This was supposed to be a wild shootout – the point total got up to 76 – with both sides losing a ton of defensive talent, but that didn’t materialize after a fun first half. There weren’t too many mistakes – just one turnover coming from Oregon – but neither the third quarter stalled until the wild fourth quarter closed with a bang.

– North Carolina connected on all four of its fourth down tries. Oregon converted just one of its two chances.

Oregon might have been missing a ton of defense talents, but it was still a huge favorite and the offense didn’t do enough to make this easy against a miserable North Carolina D. Even so, it was a bowl win to close out a season that could’ve and should’ve been so much more.

The blowout loss to Georgia to start the Dan Lanning era was bad, in several ways the loss at Oregon State to close the regular season was worse, and a team that should’ve bene in the College Football Playoff mix had to battle against North Carolina in the Holiday Bowl.

Even so, it was a second straight ten-win season and a third double-digit win season that likely would’ve been 4-for-4 except the outlier was 2020.

Give North Carolina credit for coming really, really close to pulling this out without WR Josh Downs and a slew of other key parts. The offense didn’t work like it was supposed to, and yet it made this a ball game.

Even so, this ends the season with four straight losses – including a bad loss to a mediocre Georgia Tech and a rivalry whiff against NC State – and it’s a third straight bowl loss for Mack Brown. North Carolina is just 1-6 in the last seven bowl appearances.