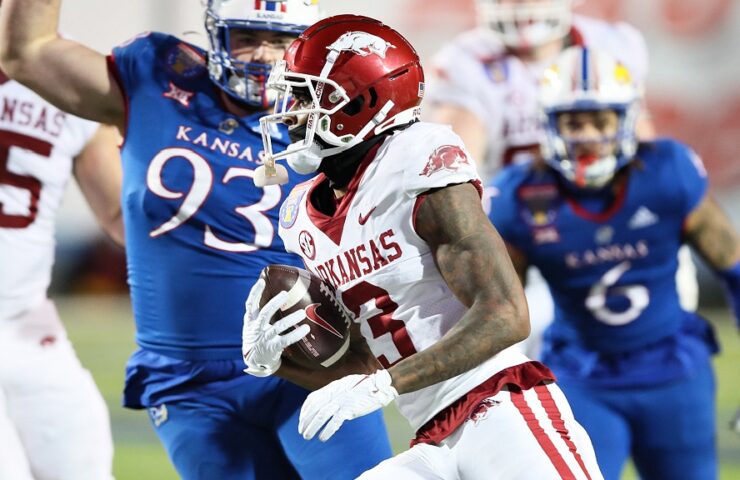 Arkansas beat Kansas 55-53 in 3 OTs to win the AutoZone Liberty Bowl. What happened, who was the player of the game, and what does it all mean?

Arkansas 55, Kansas 53 3OT AutoZone Liberty Bowl What Happened, Player of the Game, What It All Means

– One of the wildest bowl games ever ended in a misfire. In the third overtime – it goes to two-point conversions after two OTs – Kansas backup QB Jason Bean threw a bad pass on a perfectly designed play, and Arkansas survived.

The Hogs got two touchdown runs in their first two overtime possessions – including a 20-yarder from KJ Jefferson – and connected on its two-point tries both in the second and third overtimes.

They thought they had it won in the second OT when Kansas QB Jalon Daniels – who ran for a touchdown to pull within two – was stopped just short of the goal line on the two-point conversion, but Arkansas’ Quincey McAdoo was called for targeting, KU converted, and it sent the game into that third OT. Before all of THAT …

– Arkansas was rolling. It was up 31-7 in the first half helped by two Jefferson touchdown passes and a scoring run, and it was up 38-13 in the third. Kansas cranked up a few scoring drives to make it interesting, but instead of playing it conservative late – the Jayhawks didn’t have any timeouts left – Arkansas kept cranking up the offense, lost a very, very questionable fumble, and then it all broke loose from there …

– Daniels left the Jayhawks on a quick touchdown drive to pull within 8 with just over a minute to play. They recovered a perfectly executed onside kick, went 50 yards in four plays with Daniels finding Luke Grimm for a 21-yard touchdown and Lawrence Arnold for two, and the wild comeback was complete to force overtime.

AutoZone Liberty Bowl What It All Means

Arkansas came entirely too close to one of the all-time biggest gags. It got the win, but the defense was nowhere to be found over the last 20 minutes, the pass rush died, and the failed execution on the onside kick and on Kansas drive after Kansas drive was epically awful. With that said …

All that matters now is a winning season, a positive victory to go into 2023, and a second bowl win in a row for Sam Pittman. Now the program is 4-1 in the last five bowl appearances and 6-2 in the last eight going back to 2008.

It’s little solace at the moment, but imagine what a Jayhawk football fan would’ve said if four months ago you said Kansas would be in a bowl game and mount one of the greatest comebacks in college football history.

Yeah, the team came up just short – did Jason Bean think it was first down in the third overtime? – but all anyone will remember is the heart of this team to do what it did, and the talent of Jalon Daniels and that offense for rolling late.

Okay, so it was 15th straight losing season, but it sure as shoot doesn’t feel like it. It was the first bowl appearance since 2008, the first season with more than five wins since 2009, and head coach Lance Leipold has made Kansas one of the cool teams going into next year. It’s totally a corny cliché, but really, there were no losers in this game.