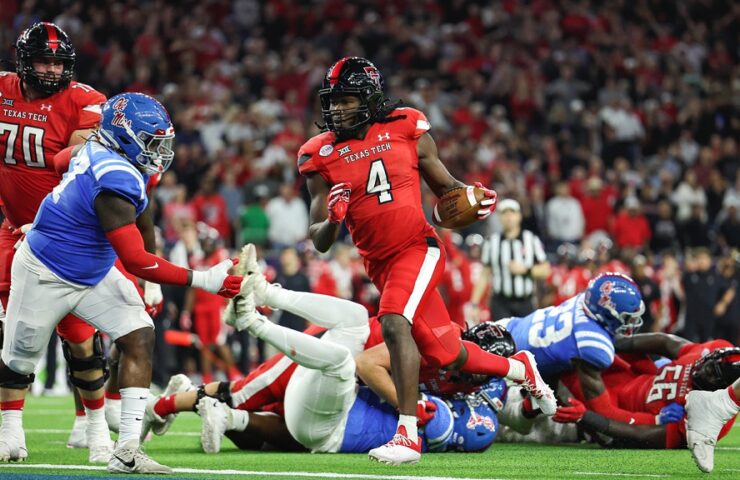 Texas Tech beat Ole Miss to win the TaxAct Texas Bowl. What happened, who was the player of the game, and what does it all mean?

Texas Tech 42, Ole Miss 25 TaxAct Texas Bowl What Happened, Player of the Game, What It All Means

– Tyler Shough ran for two touchdowns and threw a scoring pass as Texas Tech took advantage of a whole slew of Ole Miss mistakes – five turnovers – to be up 35-13 midway through the fourth quarter. The Rebels fought back with Jaxson Dart running for a touchdown and throwing another to pull within ten, but the Red Raiders ended any drama returning an onside kick try for a touchdown with just over three minutes to play.

– It was close deep into the first quarter. Zach Evans ran for a touchdown for the Rebels, Shough ran for a score, and then Texas Tech took over. Ole Miss moved the ball – it outgained Texas Tech 558 yards to 484 – and the D came up with three takeaways, but it was hill was too steep to climb in the second half.

Tyler Shough, QB Texas Tech
Injured throughout his career, the former Oregon Duck showed what all the fuss is about hitting 24-of-39 passes for 242 yards and a touchdown with a pick, and ran for a game-high 111 yards and two scores.

– Jaxson Dart had problems with turnovers, but he also threw for 361 yards and two scores and ran for 66 yards and a touchdown. Quinshon Judkins ran 23 times for 91 yards.

– Texas Tech was only flagged three times. One of them was on a delay of game penalty early to honor the late Mike Leach.

TaxAct Texas Bowl What It All Means

Texas Tech just gave head coach Joey McGuire a huge contract extension, and his team played like it’s going to be a fun time in Lubbock for years to come.

With this win, the Red Raiders closed out on a four-game winning streak, beat Oklahoma and Ole Miss along the way, and it came up with its first eight-win season since 2013.

Uhhhhhh Ole Miss? Lane Kiffin is a whale of a head coach and an elite offensive mind, but his team dropped four straight and five of its last six after starting out 7-0.

Last year’s team didn’t have any ideas after then-QB Matt Corral got hurt early in a dud of a Sugar Bowl loss to Baylor, and now this makes it two straight rough bowl performances after taking home the Outback in 2020. This is the first time the program lost back-to-back bowl games since 1967-1968.