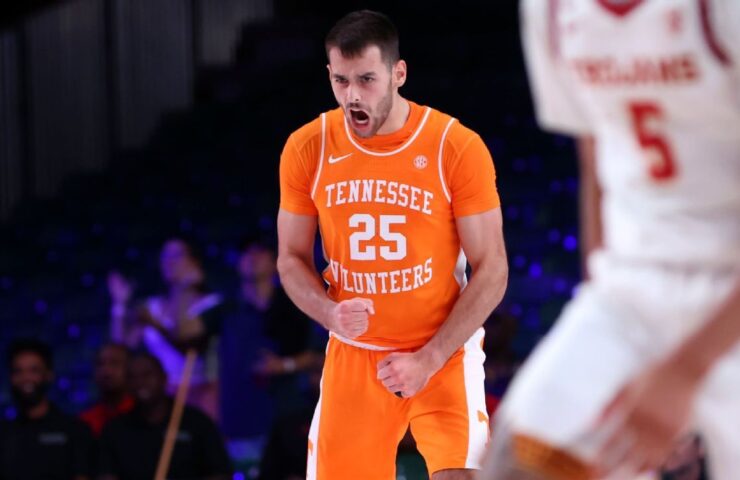 PARADISE ISLAND, Bahamas — Santiago Vescovi scored 20 points while No. 22 Tennessee locked down on third-ranked Kansas to beat the reigning national champions 64-50 in Friday night’s championship game at the Battle 4 Atlantis.

Vescovi hit five 3-pointers to drive the offense for the Volunteers (5-1), who dominated the glass, overcame their own turnover troubles and made the Jayhawks work for clean looks. And for the third time in as many days, Tennessee won despite not having leading scorer Josiah-Jordan James due to knee soreness.

This win led to a title and Vescovi being picked as the tournament’s most valuable player.

The Jayhawks didn’t have an easy first two days in the Bahamas. First came a battle to the final minutes with North Carolina State. Then came Thursday’s overtime win against Wisconsin on Bobby Pettiford Jr.’s last-second putback. But they never looked in any type of offensive flow this time, ending a 17-game winning streak dating to last year’s run to coach Bill Self’s second NCAA title.

The Vols held the Jayhawks to 32.1% shooting, bothering them with size and length around the rim. And they showed the toughness to take the ball right at the Jayhawks with 5-foot-9 sophomore guard Zakai Zeigler leading the way.

Zeigler had 14 points, including a 3-pointer to beat the shot clock at the 7-minute mark to push Tennessee’s lead to 56-38. He followed with another big one from the right wing with 4:42 left after Kansas had closed within 11.

Jalen Wilson and Joseph Yesufu each scored 14 points to lead the Jayhawks (6-1), who shot 28.6% in the first half and never warmed up. They made 5 of 21 3-pointers in what was an all-around rough night, from losing starting guard Dajuan Harris to fouls with 9 minutes left to failing to keep the Vols off the glass (45-27).

The Volunteers opened the tournament with a win over Butler, then grinded through an overtime win against Southern California in Thursday’s semifinals behind a big game from first-year forward Julian Phillips. But things were somehow easier on Friday, with Tennessee playing in front the entire way en route to its first title in three tries at the Atlantis resort.

The Associated Press contributed to this report.