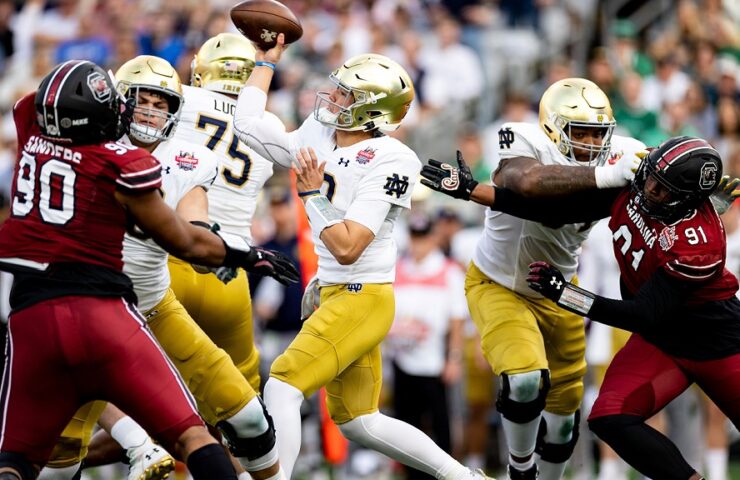 Notre Dame beat South Carolina 45-38 to win the TaxSlayer Gator Bowl. What happened, who was the player of the game, and what does it all mean?

Notre Dame 45, South Carolina 38 TaxSlayer Gator Bowl What Happened, Player of the Game, What It All Means

– In a wildly fun and wacky game, Notre Dame was finally able to push through with an 80-yard drive culminating in a 16-yard Tyler Buchner touchdown pass to Mitchell Evans for a 45-38 lead. South Carolina was able to march a little bit, but stalled after a 4th and 36 heave was knocked away. Before that …

– South Carolina held a 21-7 lead at the end of the first quarter helped by a fake field goal for a touchdown pass and a pick six of Buchner by DQ Smith. Buchner and the Irish offense were able to fight back – Buchner ran for two scores – but up 38-31 and about to put the game away, O’Donnell Fortune came up with the team’s second pick six 100 yards to tie it up. Buchner made up for it with the final scoring drive.

– The South Carolina offense struggled with its consistency – it was missing way too many key players on both sides of the ball – but Spencer Rattler threw two touchdown passes to Xavier Legette, starting out the scoring with a 13-yard strike and with a 42-yarder to take the lead in the third.

Tyler Buchner, QB Notre Dame
For good and bad, he was the main man, hitting 18-of-33 passes for 274 yards and three scores with three picks, and he ran 12 times for 61 yards and two scores.

– Spencer Rattler completed 29-of-46 passes for 246 yards and two scores with a pick, and he ran seven times for 27 yards.

TaxSlayer Gator Bowl What It All Means

Not that there’s any more pressure on Marcus Freeman than there’d be on any Notre Dame head coach, but after the way the team gacked away last year’s bowl loss to Oklahoma State, giving this one away would’ve hurt. But the Irish hung on, figured out how to get through a rocky performance, and closed going 6-1 with only a loss to USC.

This was the first bowl win since the 2019 Camping World, and now the program is 7-6 since 2008. Before that, the Irish lost nine straight bowl games.

Shane Beamer and the South Carolina staff did a great job considering how many key parts were lost. They pulled out all the stops, got a few big plays out of the defense, and if there’s such a thing as an acceptable bowl loss, this was it. The Gamecocks beat Tennessee, beat Clemson, and showed glimpses of how good they can potentially be.

Even with the loss, this was still the best season since 2017. It was the first bowl loss for Beamer – USC won the Duke’s Mayo last year – and the program is now6-3 in the last nine bowls since 2010.