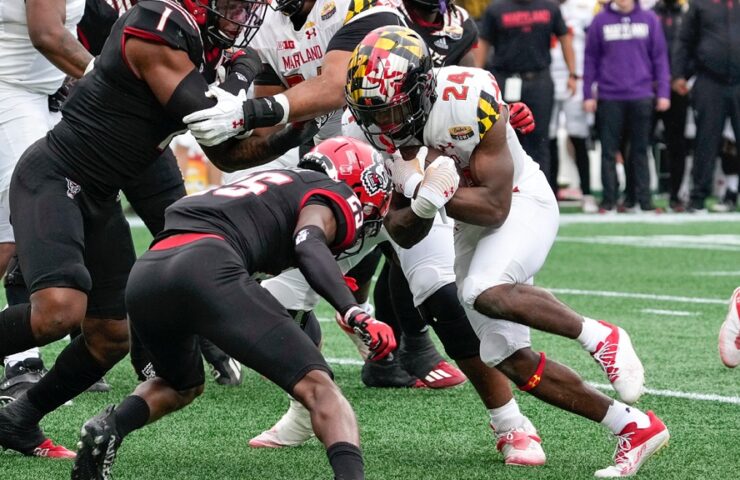 Maryland beat NC State to win the Duke’s Mayo Bowl. What happened, who was the player of the game, and what does it all mean?

Maryland 16, NC State 12 Duke’s Mayo Bowl What Happened, Player of the Game, What It All Means

– A defensive slugfest broke out. NC State only managed four field goals, and Maryland came up with three. Taulia Tagovailoa found Octavian Smith for a 19-yard score in the second quarter, and the Terps never trailed the rest of the way.

– NC State had several chances, but it couldn’t break through. The defense held late and forced a punt, but with one final shot to pull out the win, the drive was cut short right away on a pick from Jakorian Bennett to seal the Maryland win.

Drake Thomas, LB NC State
In a losing cause, Thomas came up with a game-high 11 tackles – six of them solo stops – with a sack and four tackles for loss.

Duke’s Mayo Bowl What It All Means

Maryland was able to win because of its … defense? The offense was missing most of its star receivers, there wasn’t anything happening with the running game on a regular basis, and the D kept NC State out of the end zone. Considering the rough November to close things out – going 1-3 – this was a huge way to end the season under Mike Locksley.

With eight wins, this was the best season for the program since going 9-4 in 2010, and it’s the second straight bowl win under Locksley. Maryland is now 7-4 in bowls since losing the Orange Bowl at the end of the 2001 season.

NC State couldn’t get over the hump. The defense kept the game alive, but the offense couldn’t provide any sort of a push. The momentum and fun of the win over North Carolina to end the regular season aren’t totally gone, but this was a disappointment considering how close the team was time and again to pull this off.

NC State used to be amazing in bowls – going 9-4 from 2000 to 2017 – but this loss makes it three in a row over the last five years. Even so, head coach Dave Doeren has won eight games or more in five of the last six seasons.