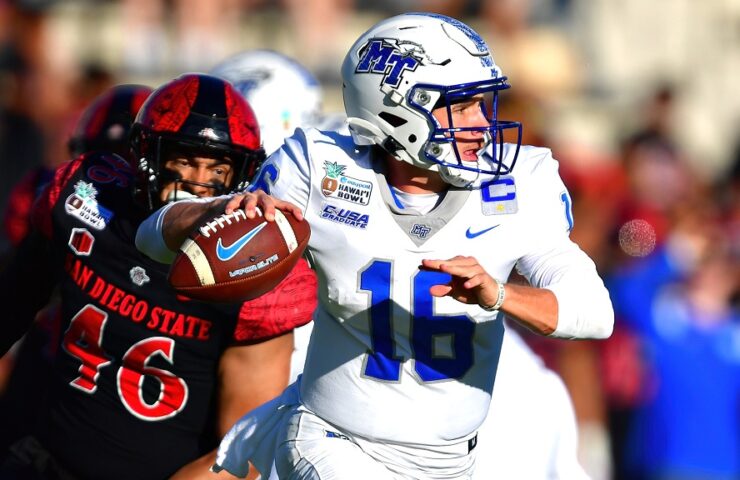 Middle Tennessee beat San Diego State 25-23 to win the EasyPost Hawaii Bowl. What happened, who was the player of the game, and what does it all mean?

Middle Tennessee 25, San Diego State 23 EasyPost Hawaii Bowl What Happened, Player of the Game, What It All Means

– Middle Tennessee’s Zeke Rankin nailed his fourth field goal of the game with just over two minutes to play to give his team a 25-23 lead. San Diego State couldn’t answer with the final drive stalling. The Blue Raiders marched relatively easily for the game-winning kick, responding to a 52-yard bomb from SDSU’s Jack Browning for a 23-22 late lead.

Jordan Ferguson, DE Middle Tennessee
His big moment came on San Diego State’s final drive with a big play to force a desperation heave. He was second on the team with five sacks with a tackles for loss to go along with his touchdown catch.

– The two teams combined to convert just 7-of-33 third down chances.

EasyPost Hawaii Bowl What It All Means

Middle Tennessee’s offensive line couldn’t hold up under the pressure of the San Diego State defense, but Chase Cunningham was able to keep his cool and make plays to get the offense in a position to win it. The field goals were enough to pull it off.

The eight-win season was the best campaign since 2018, and the bowl win was the second in a row under head coach Rick Stockstill. He’s just 4-6 in the post-season, but with the way his team closed this year out, his program is still terrific.

Next year San Diego State has to relax on the mistakes. Middle Tennessee might be great at forcing takeaways, but the Aztecs giving the ball away five times, no running game, and too many penalties cost them a bowl win.

It was an uneven year, but at least there’s hope for 2022 with Jalen Mayden a good quarterback to work around. As bad as things were at times, the program still hasn’t had a losing season since 2009, and this was the first bowl loss in the last three. The program is 6-6 in bowls since that 2009 campaign.