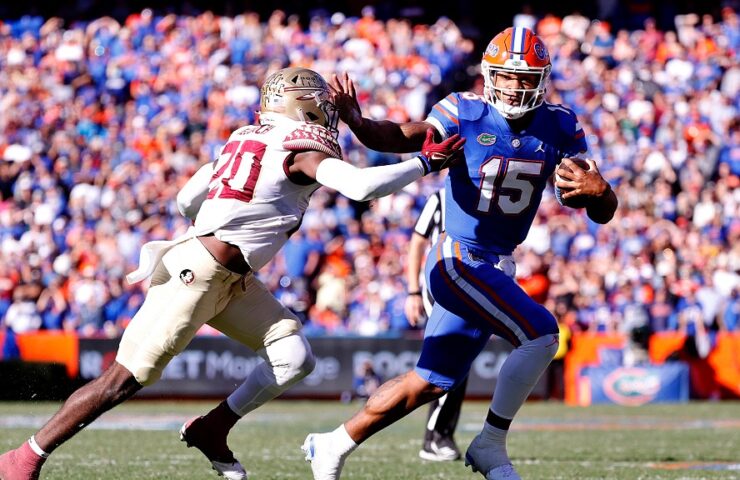 Florida vs Florida State How To Watch

Why Florida Will Win

As shocking as the 31-24 loss to Vanderbilt was, the passing game was great – Anthony Richardson threw for 400 yards – and the defense wasn’t all that bad.

It’s all up to the run defense. It didn’t give up 200 yards in six of the last seven games – Georgia was the outlier -and will give up yards here and there, but it should be able to keep Florida State from dominating with its big, gashing runs.

But there will be big, gashing runs from the Seminoles. Florida and Richardson should be able to keep up, but …

Why Florida State Will Win

The Seminoles have worked their way though the season and now have everything working averaging 5.6 yards per carry or more in five of the last six games. Now they get a Florida defense that doesn’t generate enough pressure in the backfield to be any sort of a problem.

What the Gator D can do is generate takeaways with ten in the last four games and two or more in eight of the last nine. Florida State doesn’t have a turnover problem and isn’t going to give it away enough to matter, if at all.

And then there’s the issue on third downs. Florida State leads the ACC converting 51% of its chances, Florida absolutely miserable at coming up with third down stops, and …

For all the Florida State love being thrown around lately, the really, really good win since getting by LSU at the beginning of September was against …

The Seminoles were competitive against Clemson, NC State, and Wake Forest, and lost all three. They’re 7-0 when scoring 35 points or more and 1-3 when they don’t.

Florida has allowed more than 35 points to Tennessee, Georgia, and LSU. Its 6-1 when allowing 28 points or fewer, but …

At home, Florida State will win because the offense will be in control late when it has to come up with two good scoring drives, but 15 on the other side is about to have himself a day.