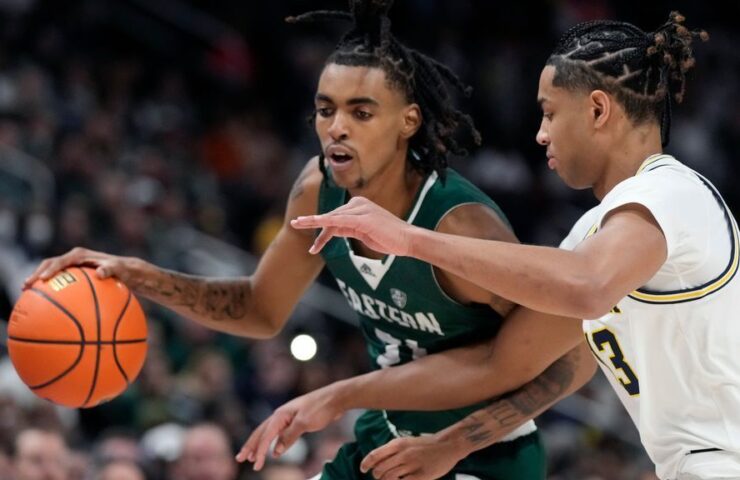 Ex-top recruit Bates has 30 in E

In Eastern Michigan’s 88-83 loss to No. 22 Michigan in Detroit on Friday night, Emoni Bates looked like the player who had once been hyped as a future NBA star, scoring 30 points and almost leading his team to an upset.

Bates, the No. 3 recruit in the 2021 class who played at Memphis last season, made 7 of his first 9 shots (12-for-19 overall) against the Wolverines in his first game since transferring.

During his sophomore season in high school, Bates was widely regarded as one of America’s top recruits, regardless of class. Once hailed as the next Kevin Durant in grassroots circles, Bates reclassified from the 2022 class, where he was the top recruit, according to ESPN’s rankings, into the 2021 class (No. 3 per ESPN) before he signed with Penny Hardaway and Memphis months before the 2021-22 season.

But Bates, who was just 17 years old at the start of his freshman campaign, struggled in his first season of college basketball — 9.7 points, 39% shooting from the field, 2.3 turnovers per game — and decided to transfer. He landed at Eastern Michigan in his hometown of Ypsilanti.

However, he was arrested on two felony charges related to a gun being found in a vehicle he was driving near campus in September. A difficult chapter for the 6-foot-9 talent became more ominous after Eastern Michigan suspended him from all team activities as a result.

But Bates was reinstated to the team last month after prosecutors agreed to drop the charges against him. Defense attorney Steve Haney said the vehicle and the gun didn’t belong to Bates.

Eastern Michigan coach Stan Heath did not play Bates in the team’s season-opening game on Monday against Division II Wayne State, and the former Michigan State assistant would not say why he sat the sophomore.

Bates was not made available to the media before or after the game, and Heath said it might be a few weeks before he is interviewed by reporters.

“It was a struggle for him when he was not with the team,” Heath said. “When he came back and talked to the team, the coaches left. I can just tell you that he appreciates his opportunity to be back home, playing with a lot of teammates he has known for years.

“What people see is all the hype, but he’s an 18-year-old kid who works really hard to be an elite basketball player.”

Against Michigan, Bates displayed some of the dazzling traits that prompted LeBron James to tweet “Emoni Bates up next!” after watching him at a grassroots event last summer.

Memphis Grizzlies star Ja Morant, who became a mentor and friend to Bates last year when he was with the Tigers, was also impressed by the sophomore’s debut Friday.

Bates showed his touch from the 3-point line (3-for-6). In the first half, he made a jump shot off one leg. He danced after a dunk in the second half. And he competed with a fire that might make Eastern Michigan a serious threat in the MAC race — the Eagles were picked to finish seventh in the league’s preseason poll — and a potential challenge for a Power 5 opponent in the first round if they can make their way to the NCAA tournament.

“There’s a chance for this young man to do some special things in the game of basketball,” Michigan coach Juwan Howard said.

Information from The Associated Press was included in this report.