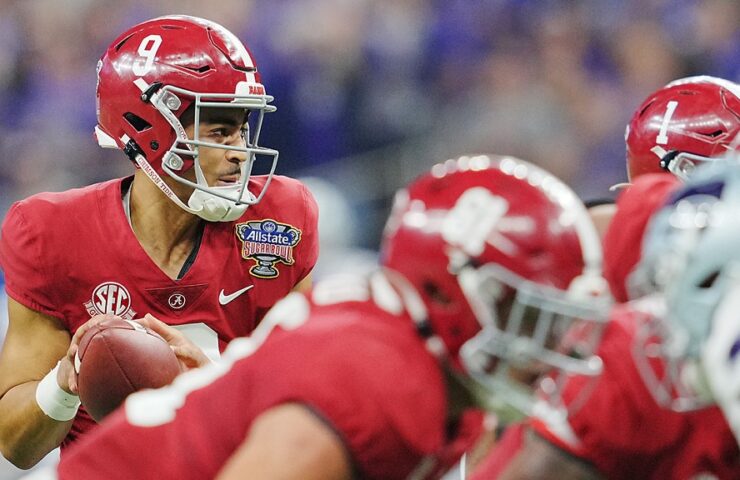 Alabama beat Kansas State to win the Allstate Sugar Bowl. What happened, who was the player of the game, and what does it all mean?

Alabama 45, Kansas State 20 Allstate Sugar Bowl What Happened, Player of the Game, What It All Means

– Kansas State got up 10-0 highlighted by an 88-yard touchdown run from Deuce Vaughn. And then a whole lot of bad things happened for the Big 12 Champion. Alabama scored 35 straight points with Bryce Young throwing four touchdown passes, including a 12-yarder to Jermaine Burton with ten seconds left in the first half to close out a 98-yard touchdown drive in the final minute.

– Down 14-10, Kansas State could’ve kicked a field goal at the end of the first half. It went for in on fourth down a few times on the drive, but misfired on 4th-and-goal. Young marched the team down the field, got the touchdown pass, Kansas State’s onside kick to start the second half was recovered by Bama, and it was never close from there.

– Kansas State got two field goals from Ty Zentner, and it closed out the seeking with a one-yard Jordan Schippers touchdown run, but it didn’t get in the end zone after Vaughn’s big dash. It had a few chances, but couldn’t close.

Bryce Young, QB Alabama
He only completed 15-of-21 passes, but he threw for 321 yards and five scores.

– Alabama S Brian Branch came up with 11 tackles with a sack and four tackles for loss. LB DeMarcco Hellams led the game with 13 tackles.

– Kansas State QB Will Howard completed 18-of-35 passes for 210 yards and two picks.

Allstate Sugar Bowl What It All Means

Alabama just did THAT to the Big 12 Champion that beat the College Football 3 seed, TCU. It was a strong finish to the season with three straight wins before coming up with this, but it was too late. In an expanded College Football Playoff Bama would’ve been the proverbial team no one wants to face, but instead, it was another blowout bowl win for Nick Saban.

It was as if Kansas State didn’t trust that it could straight up beat Bama. Of course the talent level wasn’t comparable, but this was a shaky Crimson Tide team all year, and yet the Wildcats never seemed all that confident – or consistent.

Not kicking the field goal at the end of the first half, the onside kick to start the second half – those risks were way too big, they both backfired, and the game turned into a rout. Alabama woke up the defensive stop, and then it was all Bryce Young from there.

It’s still all good. Kansas State won the Big 12 Championship, came up with ten victories for the first time since 2012, and it still made it to the Sugar Bowl. The Cats are now 1-2 under Chris Klieman in bowls, but it’s still 3-2 in the last five going back to 2016.