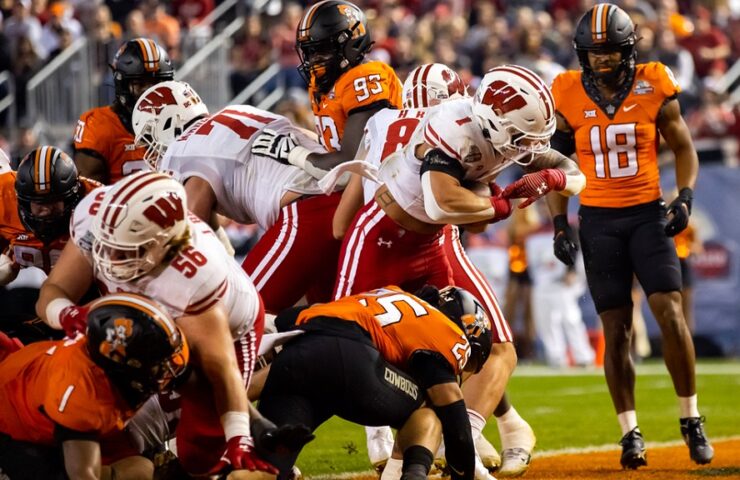 Wisconsin beat Oklahoma State 24-17 to win the Guaranteed Rate Bowl. What happened, who was the player of the game, and what does it all mean?

Wisconsin 24, Oklahoma State 17 Guaranteed Rate Bowl What Happened, Player of the Game, What It All Means

– It got interesting. Wisconsin was rolling right along with touchdown runs from Chez Mellusi and Braelon Allen as part of a 24-7 lead going into the fourth quarter. It was dominating the time of possession battle, the defense wasn’t having a problem, and then Oklahoma State got hot.

– The Cowboys took a 7-3 lead on an 84-yard catch and run for a score from Stephon Johnson, but that would be about it until a ten-play drive in the early fourth finished with a 4th-and-goal push pass for a score to Ollie Gordon.

The Badgers stopped another long drive and forced a field goal to keep a 24-17 lead. They had to give the ball back, but Cedrick Dort picked off a Garret Rangel pass and the offense was able to run out the clock.

– Jim Leonhard remained the interim head coach for Wisconsin, but Luke Fickell was on the sidelines helping the cause. The Badgers played like the Badgers with their physical style, holding on to the ball for close to 38 minutes.

Braelon Allen, RB Wisconsin
The star back was questionable, but he played running 22 times for 116 yards and a score.

– Wisconsin punter Andy Vujnovich averaged 46.7 yards per punt, put four of his seven kicks inside the 20, and ran for 13 yards and a first down on a fake punt.

Guaranteed Rate Bowl What It All Means

It was a rough year for Wisconsin. It underwhelmed when it needed to rock, it fired its head coach, and it went through an overhaul and a change for the program with a new era for 2023.

But the offense ran well, the defense held up in the end, and after all of that this season, Wisconsin played like Wisconsin. With the win, the program is on a run of 21 straight winning seasons and eight bowl wins in the last nine years.

Oklahoma State didn’t have a whole slew of key players, the season collapsed, and yet it made one great late push to show the fire and fight to almost pull off a second straight massive comeback in a bowl game.

After winning five of its last six bowl games and with an 11-5 post-season record under Mike Gundy, the team did what it could in this and made it close. Even with all of the problems and disappointments this year, it was a 17th straight winning season under Gundy.