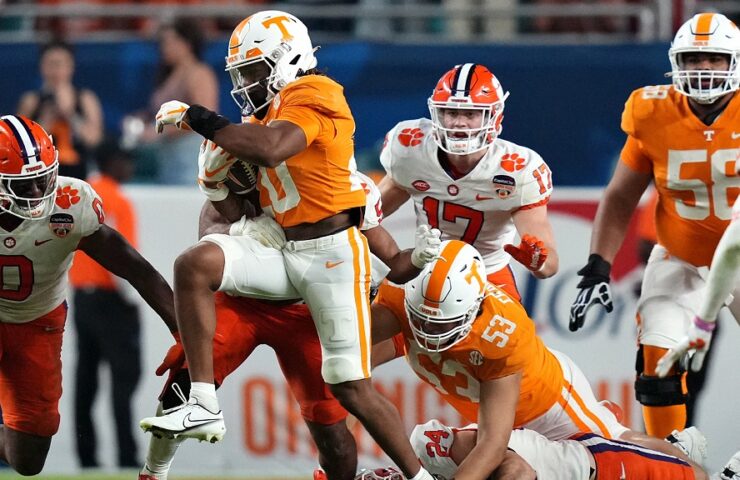 Tennessee beat Clemson 31-14 to win the Capital One Orange Bowl. What happened, who was the player of the game, and what does it all mean?

Tennessee 31, Clemson 14 Capital One Orange Bowl What Happened, Player of the Game, What It All Means

Capital One Orange Bowl What Happened

– Joe Milton connected with Bru McCoy for a 16-yard touchdown pass in the first quarter, Jabari Small rumbled for a two-yard score, and the Vols had a 14-0 lead and no problems from there. Clemson was able to pull within seven in for fourth on a Cade Klubnik touchdown run, but Milton answered right back with a 46-yard touchdown pass to Ramel Keyton to put it away.

– Clemson owned the clock and controlled the tempo of the game, but it couldn’t close. BT Potter hit two field goals, but he missed three field goals and the Tigers failed to give him a shot late in the first half when the clock ran out with Klubnik being tackled deep in Vol territory.

– Milton threw three touchdown passes. He found Squirrel White late in the third quarter for a 14-yard score and a 21-6 lead and didn’t make any big mistakes. He completed 19-of-28 passes for 251 yards and three scores and he ran for five yards.

Capital One Orange Bowl Player of the Game

Capital One Orange Bowl What It All Means

Tennessee closed out the season in style – literally. The offense didn’t have star QB Hendon Hooker of his star receivers who made the season so great, and the attack still worked. Of course it’s about the parts that make the engine go, but a 31-14 win over the ACC champion showed that it’s as much about the Josh Heupel system and style of play.

Yeah, Clemson won the ACC Championship, and yeah, Cade Klubnik looks special. But the program needs to work with the transfer portal and has to upgrade the overall talent just a wee bit to get back over the hump. It’s great as is, but it had more parts in place than Tennessee did in this, and it didn’t matter.

Even so, it was a phenomenal year. It was the 12th straight year with double-digit wins and the first season with 11 wins or more since 2019. No, this wasn’t fun, but under Dabo Swinney the Tigers are 8-4 in post-season games over the last 11 years.