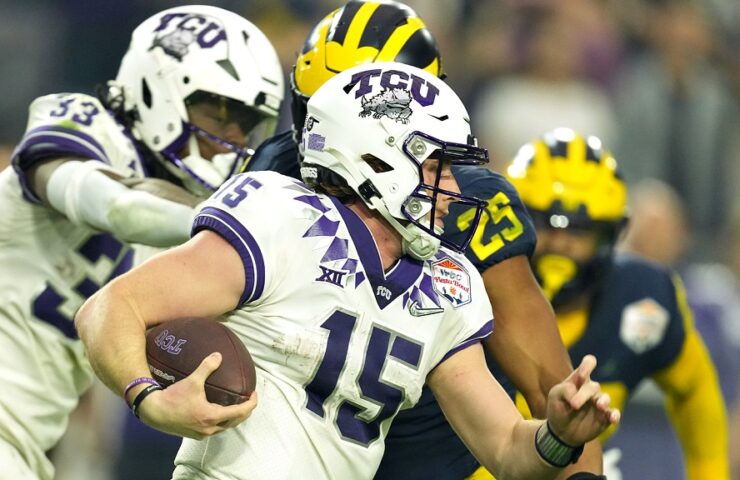 TCU beat Michigan to win the Fiesta Bowl. Five thoughts and analysis of the game, and what it all means.

5. Michigan was off from the start

Donovan Edwards ripped off a 54-yard run, and it looked like it was over eight seconds in.

The Michigan offensive line was going to dominate, the defense that held up all season long would take care of business, and yawn, it was going to be another methodical win by the undefeated Big Ten champion.

And then Michigan got cute.

Run, penalty, run, run, fourth and goal from the 2 – the reasonably worst thing that could happen was to get stuffed and pin TCU deep. Instead, the offense tried a Philly Special that was sniffed out immediately, went nowhere, and TCU got the ball on its ten.

The Horned Frogs didn’t do anything and had to punt, but the stop set the tone. Michigan didn’t have the ability to power away on the TCU defensive front, and the the tough guy ability that was there all season long never took over.

Michigan came into this No. 3 in the nation against the run. It gave up 263 yards.

It was third in the nation in total defense allowing 277 yards per game. It gave up 488.

It led the Big Ten and was fourth in the nation in rushing averaging 243 yards per game. It came up with 186, threw the ball 35 times, and was just … off.

It’s like the time off hurt the team – it disturbed the groove it was in.

NEXT: Michigan got hosed on two huge calls, but …