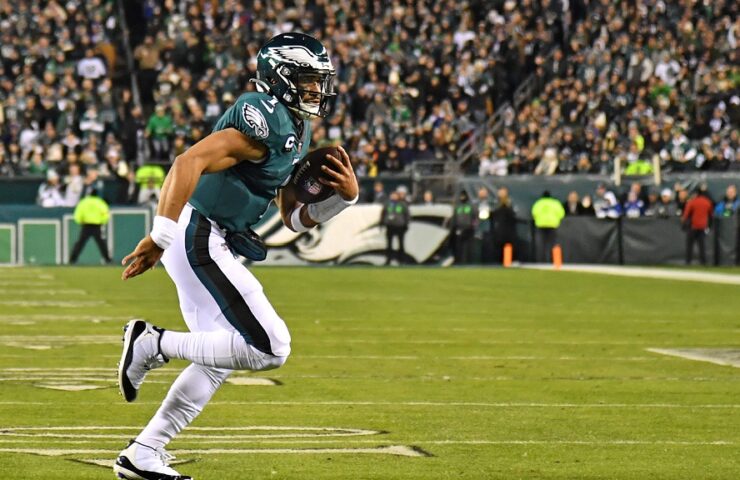 San Francisco 49ers vs Philadelphia Eagles How To Watch

Why San Francisco 49ers Will Win the NFC Championship

The system is working.

For everyone waiting for Brock Purdy to become, well, Brock Purdy, that’s not happening.

He has been brilliant, but it’s also because there’s a perfect storm of things happening with the San Francisco style of play.

1) Don’t screw up by throwing 2) very safe, short-to-midrange passes to 3) elite playmakers like Deebo Samuel, Christian McCaffrey, and George Kittle who can crank up yards after the catch. 4) Rely on a solid running game to take the pressure off, and 5) when in doubt, eat it, live to fight another day, and count on the No. 1 defense in the NFL to take care of the rest.

That’s where the “Mr. Irrelevant” aspect to Purdy’s narrative helps. It  means all of the other parts have to work, and it takes a quarterback without the ego that needs to be fed a slew of downfield shots.

It also helps that Purdy doesn’t need a ton of time in this style of offense. The Dallas pass rush certainly got to him enough to matter, but that wasn’t always the worst thing. He was able to avoid making the mistakes because he never had to force anything.

Dallas helped feed right into the San Francisco style with just 16 carries between Ezekiel Elliott and Tony Pollard. The Eagles have to show the patience to keep running even when it’s not working, and that’s not going to be easy as long as San Francisco’s methodical offense is able to control the tempo.

7-of-14 on third down conversions. Almost 33 minutes of possession. Yes, San Francisco couldn’t put the game away and had to settle for way too many field goals, but it put Dallas in a position to have to panic a bit even though it was down just one score throughout the second half.

Yeah, the Eagles beat the Giants three times in the last six games, but ofter than that, Week 6 was the last win over a team that made the playoffs.

There’s a flip side to all of this, though …

– Why Philadelphia Eagles Will Win
– 49ers vs Eagles Prediction, What’s Going to Happen

NEXT: Why Philadelphia Eagles Will Win the NFC Championship