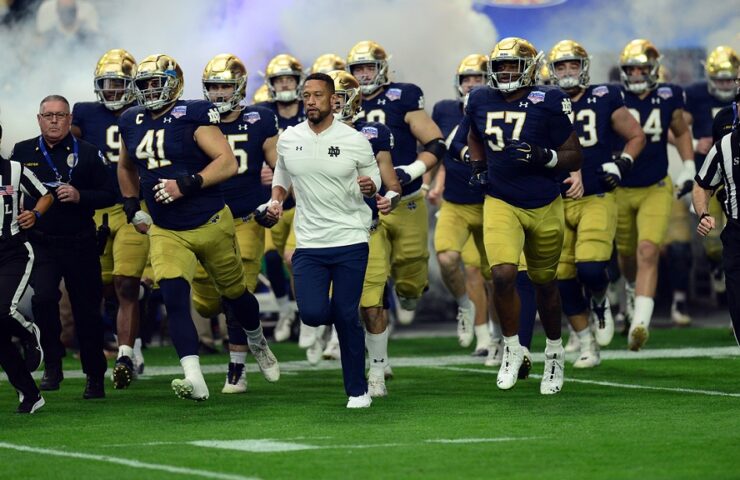 Notre Dame vs South Carolina How To Watch

– Notre Dame’s season started bad, got weird, and closes strong before the loss to USC. Call it the Marcus Freeman growing pain campaign. The team was able to figure it out rocked eventual ACC champion Clemson, and it got a nice bowl even though it lost to Marshall and Stanford along the way. After all the weird moments, getting to nine wins and closing out with a bowl would be terrific. There’s a problem, though …

The Irish are losing way too many important players. The pass rush took a major hit through the transfer portal and opt-outs, losing TE Michael Mayer to the NFL is big, and the quarterback situation is potentially a mess. On the flip side …

– Spencer Rattler is still in place for South Carolina. But who will he throw to? Star WR Josh Vann is questionable, a ton of tight ends are gone, and lowing RB Marshawn Lloyd to the transfer portal is tough. Throw in the losses in the secondary, and both teams will be throwing way too many unknown starters out there.

– South Carolina head coach Shane Beamer won last year’s Duke’s Mayo Bowl over North Carolina. That made it six bowl wins in the last eight tries for the program going back to 2010. This doesn’t matter that much one way or another to take away from the season, but beating the Fighting Irish would still be a big deal.

After beating Texas A&M in the Cotton Bowl at the end of the 1993 season, the Irish are just 6-15 in bowls including losing the last two, three of the last four, and four of the last six. After the way they collapsed in the Fiesta last year against Oklahoma State, winning this would be a huge deal for Freeman.

– The historic game that started in 1946 has been hit-or-miss lately. Rutgers was a late fill-in last year, and it showed in an ugly 38-10 loss to Wake Forest. Texas A&M annihilated NC State in 2018.

Why Notre Dame Will Win The TaxSlayer Gator Bowl

The Notre Dame personnel losses are huge, but South Carolina’s should be a tad more crippling if this turns into a low-scoring defensive battle.

Yes, the quarterback situation is a bit sketchy, and yes, losing Mayer and a few receivers is a problem, but the running game should still work.

Keep this extremely simple. Line up and pound away with an offense that got better and stronger on the ground as the season wore on, and try to control the clock throughout. The Irish weren’t always great at pounding away – Navy and USC were able to hold up just fine – but good things happened when the O line got into a groove.

Why South Carolina Will Win The TaxSlayer Gator Bowl

The Gamecocks will be able to load up against the run.

As is the Notre Dame passing game was hardly cranking up big things, and it can all but forget about anything amazing in this through the air. South Carolina won’t have to do anything funky in the secondary, and its lack of any sort of a pass rush or playmaking ability in the backfield won’t be a problem here.

Offensively, Spencer Rattler has to simply be careful.

Again, a slew of parts might be missing, but there’s a huge advantage at quarterback The Gamecock attack bakes at least two turnovers into the cake every game out, but the Notre Dame defense is hit-or-miss on takeaways. It destroyed Boston College with five of them, but it only forced multiple turnovers three times this season.

Rattler has to be the best offensive player on the field, and he’s got to make everyone around him better.