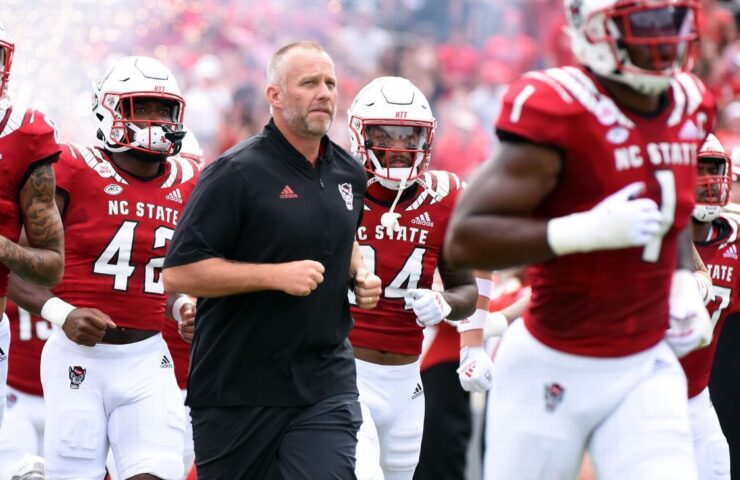 NC State took anything but the easy way out this

The worst moment of Ben Finley’s season came just before it started, which makes him something of an anomaly at NC State.

In August, the Wolfpack were riding high, a preseason top-10 team with genuine ACC championship aspirations and — at least for the emphatically optimistic — possible playoff hopes. Life was good.

For Finley, however, it was rock bottom.

Finley’s older brother, Ryan, had been arguably the most successful quarterback during head coach Dave Doeren’s tenure at NC State, and Ben figured he might follow in those footsteps. But his career had been uneventful, getting extensive reps in just one game (way back in 2020) and largely toiling in the shadows. And as preseason camp drew to a close, he met with offensive coordinator Tim Beck, who delivered the bad news: He would open the year fourth on the Wolfpack’s depth chart, and he’d be expected, three years into his NC State career, to run the scout team.

“It made me doubt myself, which was hard for me to overcome,” Finley said. “But I kept my head down and stayed quiet. I didn’t want to be a plague for the team. I wanted to do as much as I could to help the defense and help the team win.”

Finley’s year began as an outsider on a team with massive aspirations, however, their trajectories each changed course as the year progressed, with the Wolfpack enduring one setback after another, and Finley working his way to the top of the depth chart. In the end, Finley’s whatever-it-takes-to-win mantra became something of a defining goal for the Wolfpack and a mark of pride for Finley, who led NC State to its defining win of the season against North Carolina.

Ultimately, 2022 wasn’t the year NC State dreamed of. A loss to Clemson, a carousel of starting QBs, a host of other injuries, some questionable-but-consequential officiating calls and a seemingly endless supply of bad luck upended those preseason goals. Instead, what the Wolfpack were left with was something Doeren thinks might be far more significant — a resolve to get up off the mat, again and again, and fight until the bitter end.

“We’ve overcome a lot, including our own expectations,” Doeren said.

NC State — with Finley as its possible starting QB — takes on Maryland in the Duke’s Mayo Bowl on Friday (noon ET, ESPN) with a chance to get to nine wins, secure a spot in the top 25 and earn its place as one of the most dominant defenses in school history. But it won’t get the long-dreamed-of 10-win season, nor did it win the ACC title. It didn’t have a Heisman Trophy contender, a signature win over Clemson or a marquee matchup in a New Year’s Six bowl.

It’d be easy enough to call this a disappointing finish to 2022. But NC State hasn’t done anything the easy way this year.

“It wasn’t a failure,” Doeren said. “Failure would’ve been laying down. For all those things to happen, and to be able to win, that’s just insane.”

Just how wild has this season been? A few numbers:

Maryland will be the 10th bowl-eligible team the Wolfpack played this season. Among Power 5 teams, only Kansas State is guaranteed to play more.

Of all Power 5 teams with at least nine games against bowl-eligible foes, only the Wildcats, TCU and LSU have won nine games.

NC State is one of just three teams not to allow more than 30 points in a game this season. The other two are Georgia and Michigan, the top two teams in the country. Overall, the Wolfpack are allowing just more than 19 points per game, 14th best in the country. Of the 13 teams ranked higher, five are playing in New Year’s Six games.

The Wolfpack’s special teams accounted for 81 points this season. Only Michigan and San Diego State have more.

Four different starting quarterbacks won a game. In the playoff era, there’s a short list of teams who’ve had four starters in a season, period, and aside from 2014 Utah State and 2020 Army, none have won more games overall than NC State did. None saw each of those starting QBs win a game, though.

The rotating QBs were mirrored at tailback. No NC State running back had a carry in every game this season, with its best back, Demie Sumo-Karngbaye, either out or playing hurt for the final 10 games of the season. From the time Leary went down to season’s end, the Wolfpack’s running backs didn’t score a single rushing touchdown. And still, the offense persevered.

“There’s so many examples of people emerging at different times to make plays,” Doeren said, “and that speaks to our culture. These guys have grit.”

The narrative of 2022 is filled with catastrophes and near-misses, starting with the opener against East Carolina in which the Wolfpack needed a missed PAT to survive.

The Wolfpack had their chances against Clemson, but two turnovers doomed the effort.

A week later, NC State trailed Florida State 17-3 at halftime, then saw starting QB and preseason ACC player of the year Devin Leary go down with an injury early in the second half. That, by all rights, should’ve been the end of the line.

“I’m not a panicker,” Doeren said. “It sucks, it happened, now what are you going to do about it?”

That’s been a rallying cry ever since, as NC State has overcome myriad setbacks.

Jack Chambers came on in relief of Leary against Florida State and didn’t complete a pass, but thanks to a dominant defensive effort (and some flummoxing FSU playcalling at the end), NC State emerged with a miraculous 19-17 win.

A week later, the Wolfpack were upended by undefeated Syracuse in a game in which seven offensive starters were missing.

A week after that, lowly Virginia Tech completely stifled the Wolfpack’s offense to build a 21-3 lead late in the third quarter. Again, this should’ve been the end. Instead, freshman QB MJ Morris entered the proverbial phone booth and came out looking like Superman, throwing three touchdown passes in the game’s final 20 minutes to lead the Wolfpack to a 22-21 win.

The next week, Morris did it again, throwing three touchdowns in a stunning win over then-No. 21 Wake Forest.

And then Morris, too, got hurt, in an excruciating loss to Boston College in which the Wolfpack blew a 20-0 lead thanks, in part, to a pass interference call Doeren is still upset about, and this, too, probably should’ve been the end.

“There’s lots of moments here where you question what’s going on,” Doeren said. “We’ve had a lot of adversity. It’s been one of those years.”

NC State lost again the following week to Louisville, but Finley got his first real taste of action in the process, throwing a second-half touchdown that set the table for something far bigger.

“I threw that touchdown,” Finley said, “and I thought, ‘Oh my gosh. I can play here.’ I’d been sort of faking it until I made it, and I realized I belong.”

Finley got the start in the regular-season finale against rival North Carolina. He threw for 270 yards and two touchdowns and NC State led with just seconds left to play. But on the final play of the game, North Carolina scored to tie it at 24 and send the game to overtime. Maybe that, too, could’ve been the end.

The Wolfpack connected on field goals in each of the first two OT periods, and they escaped with a 30-27 win that might as well have been their national championship game.

“We kept fighting and I think that’s something that, when I’m an old man, I’ll be very proud of,” said center Grant Gibson, who missed the UNC game with an injury, too. “There were a lot of times when we could’ve stopped — and we didn’t.”

The season ended with an 8-4 record, which was well within the meat of a typical NC State bell curve. They were good, not great. That part still hurts.

“In some areas, it was a little bit disappointing because of all the expectations at the beginning of the year,” linebacker Drake Thomas said. “I do think we were a really good football team, but we faced a lot of adversity. But we really showed who we are as a team and a culture. We stayed focused and stayed together.”

That’s the part worth celebrating, he said.

Ten-win seasons are rare at NC State — just one in the school’s history — and so that feels like a goal unmet, too. But Thomas truly believes the program is close to turning a corner, reaching a point in which winning 10 games becomes the norm, when a season like that is good … but not great.

And if the Wolfpack do reach that plateau, perhaps the 2022 season will be a reason why. Because, Thomas said, a 10-win season is coming, but a year in which four different starting QBs win a game, in which NC State wins games after trailing 21-10 and 20-3, in which the defense turns in a historically good campaign and the kicker can make a case as team MVP, in which the guy running the scout team to open the season leads a double-overtime win over their rival to end it — that’ll never happen again. That was special.

The bowl game leaves a bit more on the line for the Wolfpack. Morris is healthy and practicing, and he figures to battle Finley for the starting job in 2023. The defense has a chance to be NC State’s first to hold every opponent to 30 or less since 1980. The team can win nine games for the fourth time in six years, something just 10 other Power 5 teams — all blue bloods — have done.

There is still one last moment of misery potentially awaiting Doeren in 2022, too, but it’s one he’s actually eager to endure.

The winning coach of the Duke’s Mayo Bowl gets a barrel of mayonnaise dumped on his head. Doeren despises mayo.

“It’s my worst condiment on the planet,” Doeren said, “but for these kids, I’d do it.”

They’ve been through worse, after all, and they’ve endured it without batting an eye.

NC State was actually in the middle of bowl practice at its indoor facility last week when, suddenly, the power went out. One moment, the players were running through drills, and the next moment, darkness.

“It’s been one of those years,” Doeren said. “But the guys didn’t flinch. The lights went out and they didn’t stop. They just kept practicing. These guys were amazing.”