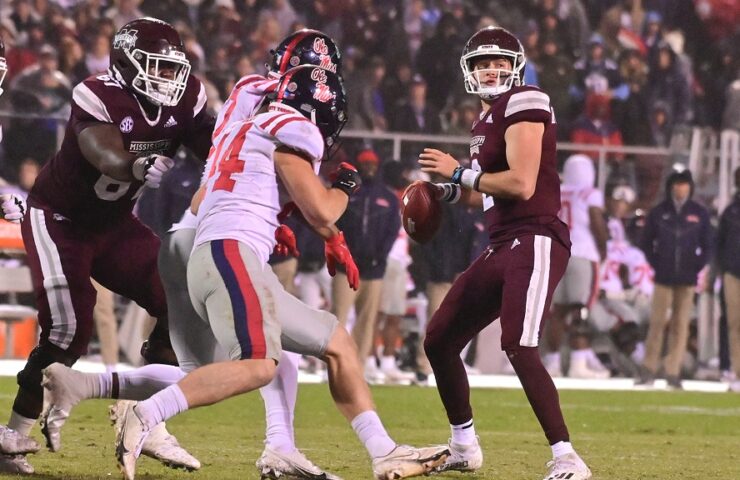 Mississippi State vs Ole Miss How To Watch

Why Mississippi State Will Win

The Ole Miss defense fell off the map over the second half of the season.

LSU ran all over it, Texas A&M was able to throw against it, and Arkansas did whatever it wanted against Rebel front that couldn’t hold up against the run and couldn’t stop the midrange passes.

Mississippi State has hardly been perfect, and it hasn’t been able to impose its will through the air like it’s supposed to, but QB Will Rogers should get plenty of time to work, the short throws will be there, and the running game might contribute to the effort, too.

The Bulldog ground game might be the second-worst in the country yardage-wise, but the team is 5-0 when averaging at least four yards per carry.

Why Ole Miss Will Win

The Mississippi State defensive front has been decent. but it’s about to deal with a backfield that rips off yards in big, giant chunks. Turnovers were the problem against Arkansas, but the offense averaged almost nine yards per carry on the way to 463 yards on the ground.

Clock control isn’t part of the plan for the Ole Miss attack, but it’ll move fast, average over five yards per carry, and it’ll make Mississippi State press a bit. That’s when the mistakes have to be forced.

Because of its style, every possession without a mistake matters for the Rebels. They’ve only turned it over more than once in three games – the Arkansas loss being one of them – and on the other side Mississippi State is 3-0 when coming up with three or more takeaways and 5-2 when generating two or more.

The Mississippi State defense held up reasonably well in the 31-21 loss in last year’s Egg Bowl, but it couldn’t come up with enough good third down stops. That’s about to be the problem again.

The Ole Miss running style isn’t just about coming up with big yards; it’s about setting up easy chances to move the chains.

The Ole Miss offense is great on third downs. The Mississippi State offense – stunningly, considering what it does – isn’t.

The Rebels make it three in a row in the series.