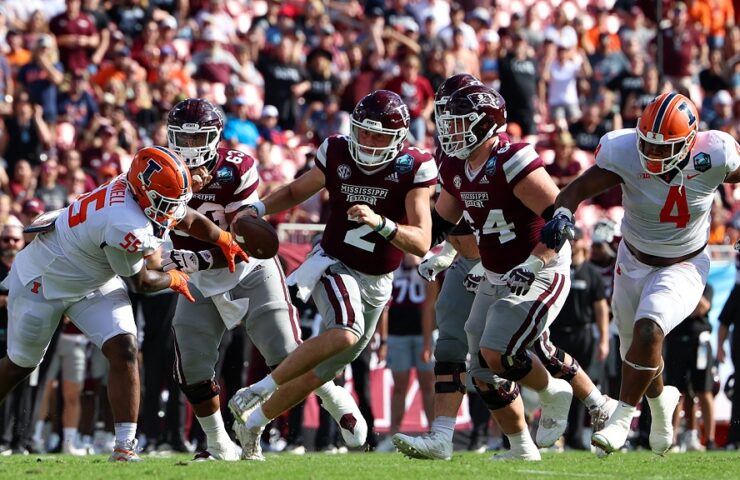 Mississippi State beat Illinois to win the ReliaQuest Bowl. What happened, who was the player of the game, and what does it all mean?

Mississippi State 19, Illinois 10 ReliaQuest Bowl What Happened, Player of the Game, What It All Means

– Massimo Biscardi hit a 27-yard field goal with four seconds to play to give Mississippi State the 13-10 lead, and Marcus Banks added on to the final score with a scoop and score for a 60-yard touchdown after a desperation final bunch of laterals by the Illini to close out a hard-fought, tough game.

– Illinois got up 10-7 at going into halftime helped by a two-yard Tommy DeVito touchdown run and a 52-yard bomb of a field goal from Caleb Griffin, but that was it for the scoring.

– Mississippi State got a – let’s just say, very, very questionable – touchdown from Justin Robinson on fourth and goal from the eight to help tie it up. His foot appeared to be out, but it was called a touchdown and wasn’t reversed. That started a fourth quarter run of 16 unanswered points.

ReliaQuest Bowl Player of the Game

Jett Johnson, LB Mississippi State
He made a game-high 12 tackles with a sack and 1.5 tackles for loss.

– Illinois was without star RB Chase Brown. It ran 29 times for 35 yards and a score – the O line allowed seven sacks and ten tackles for loss.

ReliaQuest Bowl What It All Means

This was the first game for Mississippi State since the death of head coach Mike Leach, and it won with defense and not a high-octane offense. The Illinois defense had a lot to do with that, but the running game cranked out over five yards per carry and QB Will Rogers came up with an okay game to go along with two picks.

This closes out the season with three straight wins – including a victory over Ole Miss – and was the first win for new head coach Zach Arnett. Under Leach and former head man Joe Moorhead, Mississippi State was 1-3 in its previous four bowls before this.

Illinois was missing a few key guys in the secondary along with RB Chase Brown, and it came within a bad call for a Bulldog touchdown from possibly pulling this off. However, this showed the need for more of a downfield passing game – WR Isaiah Williams did what he could with a slew of yards after the catch, finishing with 114 yards – but there wasn’t any running game and the O line couldn’t keep Tommy DeVito from getting hit.

Even with the loss, this was a terrific second season under head coach Bret Bielema, coming up with the program’s first winning season since 2011, establishing a tough defensive style and attitude going forward.