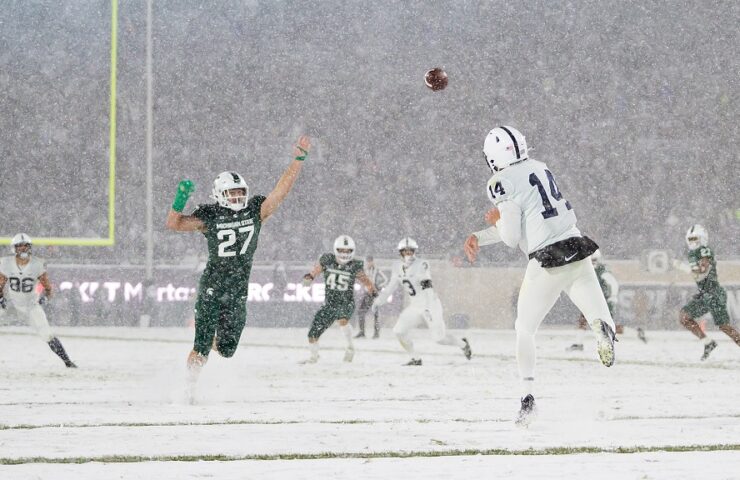 Michigan State vs Penn State How To Watch

Why Michigan State Will Win

The Michigan State passing game should be able to make this a bit of a battle.

It won’t crank up 400 yards or anything, but it’s going push the ball down the field a bit, it’ll keep the chains moving, and it should be able to go for well over 250 yards. Penn State was able to hold up against the Maryland passing game, but it hasn’t dealt with a slew of efficient attacks.

This is Michigan State’s shot at going to a bowl game. It’s going to turn it all loose.

The pass rush is there on the defensive side, the offensive front should be able to keep Penn State out of the backfield, and …

Why Penn State Will Win

It has a possible New Year’s Six bowl game on the line – the only losses were to Michigan and Ohio State – and it’s about to showcase the rotation of running backs against a Michigan State defensive front that got hammered by Indiana for 257 rushing yards and four scores.

It was the third dime in the last four games and the fourth time in the last six that Michigan State gave up over 220 rushing yards. Penn State isn’t going to get too crazy here, and it’s not going to press with the passing attack.

Keep things simple, wait for the offensive line to take over, dominate the time of possession battle against a team that keeps the ball for just over 26 minutes a game, and …

It’s still amazing how Michigan State gave away the Indiana game. It’ll come out hot and might even lead after the first quarter.

And then the Michigan State run defense will give it all away.

The Spartans are 0-4 when allowing 225 yards or more, and Penn State should be able to get there for the fourth time this season.

The Nittany Lions are 8-0 when it runs for more than 111 yards. Washington – who threw for almost 400 yards in the win – and Akron are the only two teams that didn’t come up with at least 140 on the MSU D.