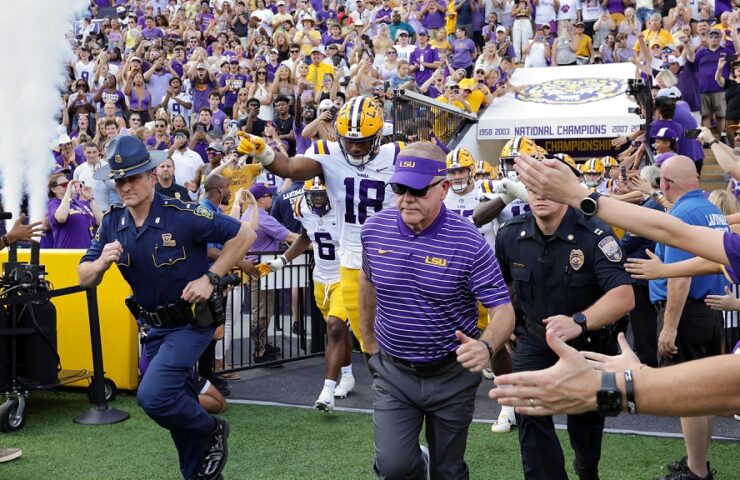 LSU vs Purdue How To Watch

– For the second straight bowl game, LSU is playing a bunch of guys wearing the uniforms, but the main men are done. The team will hardly be a proper representation of the 2022 self.

It was a great first season under Brian Kelly with a win over Alabama and a trip to the SEC Championship, but if it seems like just about everyone has opted out, or is injured, or both, it’s because that’s the deal. From WR Kayshon Boutte, to dangerous pass rusher BJ Ojulari, to … this could go on for a while.

– Purdue is playing a bunch of guys wearing the uniforms, but plenty of the main men are done, including the head coach. Jeff Brohm made a lateral move to Louisville, but another Brohm – brother Brian – will coach in the bowl while new head coach Ryan Walters waits in the wings. The coaching, though, isn’t the issue.

QB Aidan O’Connell is out, so is top TE Payne Durham, so is star WR Charlies Jones, so is … this could go on for a while.

– Purdue has been okay in bowl games, but it’s usually the team that has the full complement of players. Last year it won a Music City Bowl thriller over Tennessee, and was 2-1 in bowls under Brohm and 4-2 going back to 2007.

– LSU has been wonderful in bowl games over the years. Again, last year’s team was a shadow of its normal self in a sad Texas Bowl loss to Kansas State, but before that it won three straight before that – two of them in the College Football Playoff including the national title. Before last year it was 5-1 since 2014 and 17-7 since 1989.

– The Citrus Bowl hasn’t been too bad lately, but ie’s on a bit of a rough run over the last decade. Last year’s 20-17 Kentucky win over Iowa was interesting, even if there weren’t a ton of fireworks. Three of the last five have been close, but nine of the last 13 were decided by double-digits.

Why Purdue Will Win The Cheez-It Citrus Bowl

The passing game should still work.

Aidan O’Connell might be out, but Austin Burton is a big passer who’s just seasoned enough to be okay. He stepped in against Florida Atlantic and hit 72% of his passes for 166 yards and three scores, but he hasn’t done anything since with O’Connell leading the way to the Big Ten Championship.

The midrange passing game might not be quite as sharp, but it’ll keep things moving, the offensive line should be able to hold up, and for a team that throws like Purdue does, the running game is every bit as important.

The Boilermakers are 6-0 when running for more than 111 yards, and 2-5 when they don’t. The backs are still in place to mix things up a bit.

LSU is 0-3 when allowing more than 210 rushing yards and 9-1 when it gives up fewer. Purdue has to at least give it a try with 35 carries or so.

Why LSU Will Win The Cheez-It Citrus Bowl

Jayden Daniels is supposed to give it a go.

The LSU quarterback is dinged up, but he’s coming back for the 2023 season and he should be able to play in this. In a game that’s missing a whole lot of key parts, having Daniels as a steadying factor might make all of the difference.

When the offense is moving, it’s great on third downs, there’s enough of a running game to balance things out, and when Daniels is in a groove, the passing attack can go off. It was in comeback/keep up mode, but the offense threw for over 500 yards against Georgia in the SEC Championship.

Oddly enough, Purdue wins when it gives up a ton of passing yards – it’s 6-2 when allowing 200 yards or more. It’s more about its own offense, and that’s where the LSU defense has to kick in.

As long as the defensive front can hold up against the run, and if the offensive line can give Daniels time …