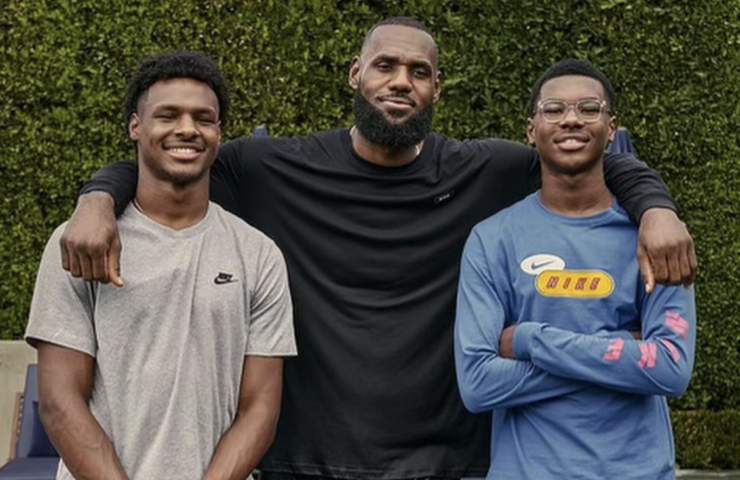 Inside Bronny James’ celebrity summer before his senior year

The Bronny James recruitment tour could heat up in the coming months as the son of Los Angeles Lakers superstar LeBron James begins his senior year of high school basketball.

The 18-year-old prospect, who attends Sierra Canyon High School in Chatsworth, California, will tip off the season against the King Drew Magnet Eagles of Los Angeles. His younger brother, Bryce, will also play for the Trailblazers this season as a sophomore.

Bronny is ranked as the No. 34 prospect on the ESPN 100 for the 2023 class and has received scholarship offers from notable teams like the Memphis Tigers and Michigan Wolverines.

Off the court, Bronny has kept himself busy. He has partied like — and with — a superstar, experienced college recruitment and took his talents into show business.

Here’s what’s Bronny has been up to as he starts his senior season in basketball:

At the beginning of August, Bronny and Bryce visited the Lakers’ practice facility for a workout with Dad. A highlight from the session was Bryce, LeBron and Bronny throwing down dunks in rapid succession.

In an interview with Sports Illustrated in August, James expressed his desire to play with his sons in the NBA.

Bronny is eligible for the NBA draft in 2024 and Bryce in 2026. James can become a free agent in 2024, so there is potential for the trio to appear on an NBA roster.

Bronny’s September began with a trip to Ohio State University. He and his father took in some Buckeyes football on Sept. 3, watching the team defeat the Notre Dame Fighting Irish 21-10.

.@KingJames and Bronny soaking in some CFB action in Columbus @NDFootball | @OhioStateFB pic.twitter.com/GVFfa26mRE

Bronny participated in the school’s “Go Bucks” chant, and the Ohio State crowd showed how much they wanted the 18-year-old prospect to enroll at the university.

On Sept. 6, Bronny posted a picture of himself in Ohio State basketball threads on Instagram. The Buckeyes are one of the teams that have offered Bronny a hoops scholarship.

The photo-ops didn’t stop there, as Bronny joined his family for a shoot with Vanity Fair. LeBron posted an image of the photoshoot to his Instagram page on Sept. 13.

Oct. 6 was Bronny’s 18th birthday, and he celebrated accordingly that weekend. He hosted a birthday party at Harriet’s Rooftop bar in West Hollywood, California, that featured a live performance from rapper Travis Scott.

LeBron posted a touching message to his oldest son on Instagram on his big day.

Later that month, Bronny starred alongside his father in a Beats by Dre commercial. Bronny signed a name, image and likeness deal with the company, posting the news to his Instagram account on Oct. 17.

LeBron has been putting in work but it’s starting to get a little weird.

Watch @kingjames vs. Father Time in a battle of the ages. #LeBronXX pic.twitter.com/ezxJWxRlWu

Nike aired another commercial featuring Bronny alongside his father and Momoa at the start of November.

The acting exposure continued for Bronny as he and his dad starred alongside actor Ben Stiller, his son Quinlin, actor John Travolta and his daughter Ella in an ad for the new “God of War: Ragnarök” videogame.

On Nov. 9, the day of the game’s release, LeBron posted a video on Instagram in which he is dressed as Kratos, the main character in “God of War,” alongside Bronny.

Previous ArticleCock Vitale: It was a thrill to be back on
Next ArticleCollege athletes advocating for profits sharing