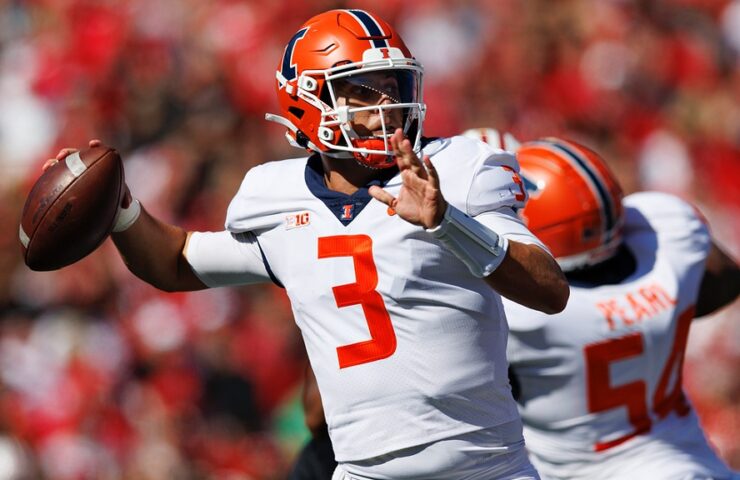 Illinois vs Northwestern How To Watch

Why Illinois Will Win

Northwestern hasn’t been able to figure out that whole scoring thing as the season has gone on.

The offense will move the ball a bit, but turnovers are a massive problem – two or more in eight games and six in the last two – and it’s having an impossible time putting the biscuit in the basket.

Northwestern lost to Maryland 31-24. That was the only time in the last eight games it scores more than 14 points, and now it’s going against the No. 2 defense in college football that allows 259 points and 13 points per game.

As long as the Illini can get up fast and don’t royally screw up, it should have this, but …

Why Northwestern Will Win

Can Northwestern throw a bit?

It couldn’t do it against Ohio State or Purdue, but the defense was able to keep the score in check – the weather conditions had everything to do with that against the Buckeyes – but the passing game has occasionally been okay enough to be at least accurate.

That’s how you bother the Illinois defense – you have to throw against it. Michigan State, Purdue, and Michigan were all able to run in their wins against Illinois, but that was set up by being decent enough through the air to be a bother.

The Wildcats have to mix up the offense a little bit and the run defense has go one up with a special day.

There’s no shot without holding the Illini to under 160 rushing yards, but …

Illinois might have lost its last three games, but it doesn’t turn the ball over – just three in the last five games.

It won’t be anything pretty, but Illinois will take its second win in a row over Chicago’s Hometown Team.