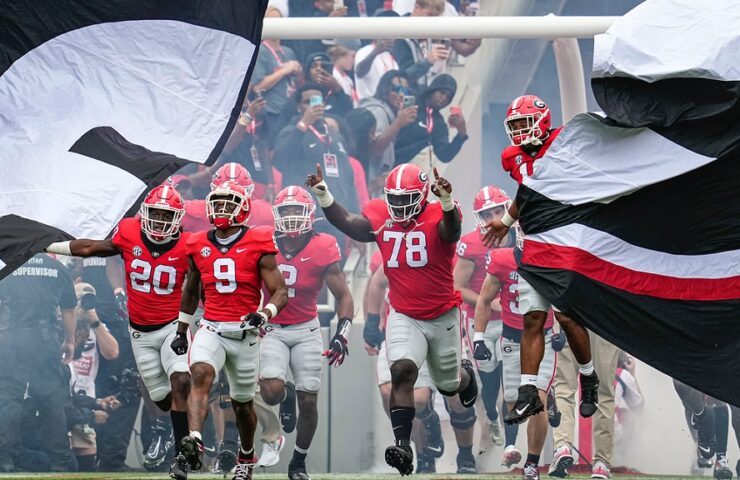 Georgia vs Ohio State How To Watch

– Georgia hasn’t exactly made greatness boring, but it’s not like this is a star-studded superpower with a slew of household names. It’s a rock-solid team that’s good at blocking and tackling and going about its business as it rolls towards what might just be a second straight national title. There’s one key difference from the 2021 version, though.

2022 Georgia had a perfect storm of positives to get here. Years of amazing recruiting built up the talent level, and it all matured enough to create a true Next Man Up system with future NFL stars replacing the NFL stars who left off of last year’s national champion team.

Combine that with a relatively down year by Alabama – and not having to face the Tide – a 44-year-old starting quarterback who knows what he’s doing (Stetson Bennett is actually 25), and all those new starters looking to prove the greatness of this team compared to last year, and this might be an even stronger run.

– You let them in the door. The Buckeyes were out. All it would’ve taken was USC’s Caleb Williams not hurting his hamstring, or Clemson and/or Tennessee not gacking the moment against South Carolina, or Alabama’s Jahmyr Gibbs making the late grab against Tennessee, or any one of a number of things that could’ve happened to put someone else in the No. 4 spot in the College Football Playoff.

But they’re in. They’re in the tournament at the 4, just like 2019 Alabama, and just like 2014 Ohio State – both of those teams won two games and the national title.

The team rolled through the season despite a slew of injuries, and all was set up to be the No. 2 seed. All it had to do was beat Michigan, take down Purdue in the Big Ten Championship, and it would’ve played TCU not Georgia in the CFP first round.

You have to win two no matter what, so Ohio State might as well get the Georgia game out of the way now.

There are 3.5 teams going with the same NFL talent level – Georgia, Alabama, the USC offense, and Ohio State. Even with a few key guys out – RB TreyVeon Henderson is out with a foot injury, WR Jaxson Smith-Njigba is nursing his injured hamstring as he gets ready for the NFL – the guys are still there to hang position for position with the defending national champs.

– Ohio State has lived in the biggest bowls for the last 30 years. In the eight-year playoff era, it’s 7-3 in bowl games with the three losses all in the CFP. It won an epic Rose Bowl over Utah last year, lost the College Football Playoff National Championship to Alabama in 2020, and it’s in the Peach for first time ever.

– Georgia has been a bowl god under Kirby Smart. The program has gone 9-3 over the last 12 bowls going back to the Mark Richt era. It won its last four – including two last season – with the last two losses the national title agains Alabama to end the 2017 season and in a tough Sugar loss to Texas in 2018. This is the program’s seventh Peach appearance, and …

– This is just the second time these two have met. Georgia beat Ohio State 21-14 in the 1992 Citrus Bowl, but that’s been it for these two powerhouses.

Between playoff games and close battles that defined the narrative for the participating teams, almost all of the last several Peach Bowls have mattered.

Last year’s Michigan State win over Pitt was entertaining at the end, the Georgia win over Cincinnati in the 2020 season was good, the 2019 version – LSU blowing out Oklahoma – was interesting theater, and UCF made a whole program around the win over Auburn at the end of the 2017 season.

The first two Peach Bowls as part of the College Football Playoff were lousy. This one shouldn’t be.