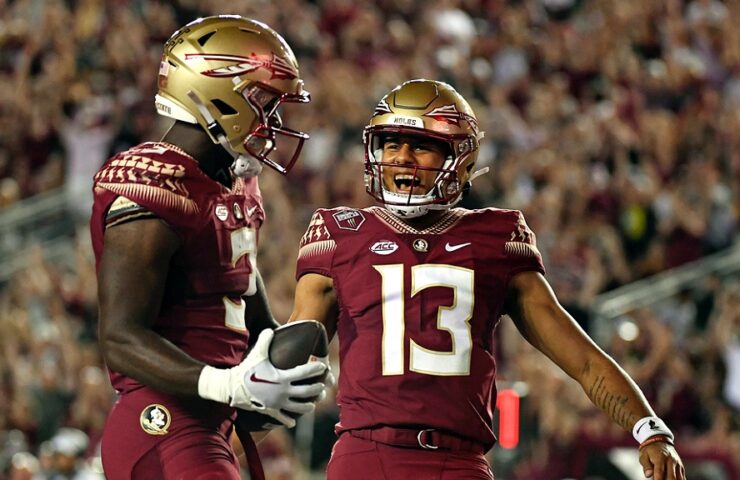 Florida State vs Oklahoma How To Watch

– There was a time not too terribly long ago when this was a national championship matchup. Okay, so it was over 20 years ago when they met for the BCS Championship – a 13-2 Oklahoma win – but these are still two powerhouse-infrastructure/expectation programs looking to use this as a possible launching pad.

This bowl hit a bad snag of really, really bad games from 2013 to 2019 when it was called the Russell Athletic Bowl and then the Camping World Bowl.

There were seven straight games of blowouts to various degrees, and then it became the Cheez-It Bowl. Oklahoma State beast Miami 37-34 in 2020, and last year Clemson pushed past Iowa State 20-13. These OU and FSU might keep it going.

– Florida State might have turned a corner under head coach Mike Norvell, but it puled up out of a three-game losing streak nosedive to close with five straight wins induing a total domination of Miami and a shootout victory over Florida. Throw in the early season win over LSU and it’s been a great year. Winning this would be a sweetener.

– Yeah, Oklahoma fell off a cliff. Lincoln Riley took the fun – and eventual Heisman winner Caleb Williams – out to LA, and Brent Venables was in charge of being the next star up to keep the program’s success going.

After a 3-0 start, OU lost six of its last nine games – including a 49-0 embarrassment against Texas – but it beat Oklahoma State, got bowl eligible, and now this is the first game of the rest of the program’s life.

– Oklahoma’s recent bowl history is all about context. Yeah, it’s just 3-5 in its last eight, but four of those five were College Football Playoff losses. Under Riley it hung 55 on a depleted Florida team in the 2020 Cotton, and put 47 on a depleted Oregon in last year’s Alamo.

– This signals the return to the bowl circuit for a Florida State program that was a given to get to one of these things since 1980. It missed out in the last two years after losing to Arizona State in the 2019 Sun, and it lost three of its last five – starting with a blowout loss to Oregon in the first ever College Football Playoff game – after winning three straight bowls.

Why Florida State Will Win The Cheez-It Bowl

RB Eric Gray is off to the next level, a few NFL-caliber offensive linemen – Anton Harrison and Wanya Morris – aren’t playing, and the defense loses some parts, too.

On the flip side, Florida State is getting back a few of its key players for this. It starts with QB Jordan Travis, continues with future NFL pass rusher Jared Verse, and in all, this is about as close to normal as FSU might get from here on for a bowl that’s not among the New Year’s Six elite.

The Seminoles will move the chains. The rushing attack under Norvell is doing what it’s supposed to, Travis is excellent on third downs, and it should all work against an Oklahoma defense that was last in the Big 12, struggles to get of the field, and doesn’t do much in the mix to help control the time of possession battle.

Yeah, the Sooner offense likes to move quickly, but it doesn’t help the D. The team is 0-5 when allowing 200 rushing yards or more. Florida State averages 218 yards per game on the ground.

Why Oklahoma Will Win The Cheez-It Bowl

Just keep up the pace.

The defense won’t be able to do much to slow down the Sooners, but even without Gray running the ball the offense should be able to keep up. There aren’t a lot of turnovers, there’s a good balance, and QB Dillon Gabriel is experienced enough to spread the ball around and keep the attack moving.

Yeah, Gray carried the workload, but there’s just enough of a rotation to go along with Gabriel getting on the move to potentially keep the Florida State defense honest.

As long as Gabriel is able to connect on the midrange throws and come up with manageable third down chances, this should be a back-and-forth fight.

The run defense has to sell out. Jordan Travis might be terrific at getting the ball into the hands of his playmakers, but everything chances for this OU D when it can hold on up front.

Just don’t get gouged, come up with a few takeaways – 5-2 when generating multiple turnovers – and …