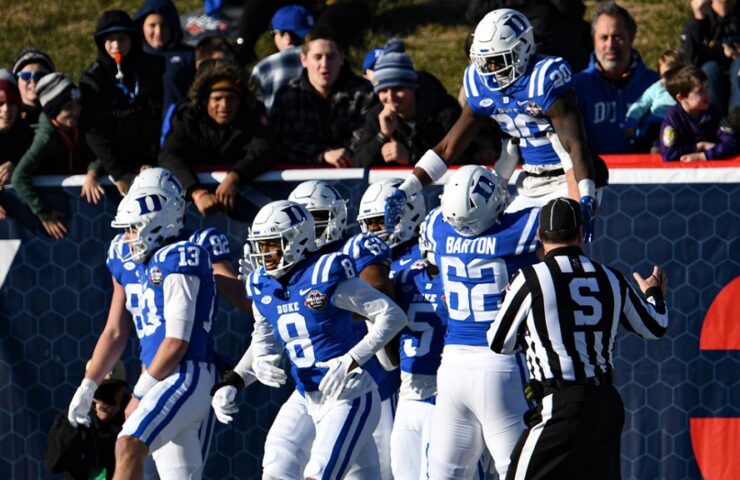 Duke 30, UCF 13 Military Bowl What Happened, What It

Duke beat UCF to win the Military Bowl. What happened, who was the player of the game, and what does it all mean?

Duke 30, UCF 13 Military Bowl What Happened, Player of the Game, What It All Means

– Duke had no problems moving the ball on a depleted UCF defense. QB Riley Leonard ran for two touchdowns, Jaquez Moore starting the scoring with a 14-yard dash, and Todd Pelino hit three field goals. The Blue Devils were up 20-7 at halftime and 23-7 before UCF got back on the board.

– Isaiah Bowser ran for two short touchdowns for the Knights – tying it at seven in the first quarter and closing out a long drive in the fourth – but the offense couldn’t stay on the field long enough. Two turnovers – especially a fumble by QB John Rhys Plumlee – turned the tide.

– UCF fought the good fight. It was missing a slew of key players on both sides of the ball – especially on defense – and Duke had just about everyone available. It showed – the Blue Devils were far crispier offensively and looked like the regular season self on defense.

Military Bowl Player of the Game

Riley Leonard, QB Duke
He completed 19-of-28 passes for 173 yards and ran ten times for a game-high 63 yards and two touchdowns.

– John Rhys Plumlee was a bit questionable before the game, but he battled through hitting 21-of-34 passes for 182 yards with an interception and fumble and ran for 21 yards on 14 carries. Isaiah Bowser led the team with 39 rushing yards and two scores.

Military Bowl What It All Means

It might have been among the most underappreciated stories of the 2022 season – Duke was fantastic in Mike Elko’s first season. It only lost four games with three of them by three points or fewer, and the other a 35-27 fight against Kansas when it was rolling at the time.

This was the program’s first winning season since 2018 and the first nine-win campaign since 2014. It was also the first bowl appearance since 2018, and with the victory Duke has won four straight since 2015.

This wasn’t really a fair representation of UCF. It was missing way too many important parts on both sides of the ball, but it was still a good effort and is still closed out the program’s fifth season with nine wins or more in the last six. With the loss, though, that makes it five bowl losses in the last eight and took Gus Malzahn’s bowl record to 3-6.