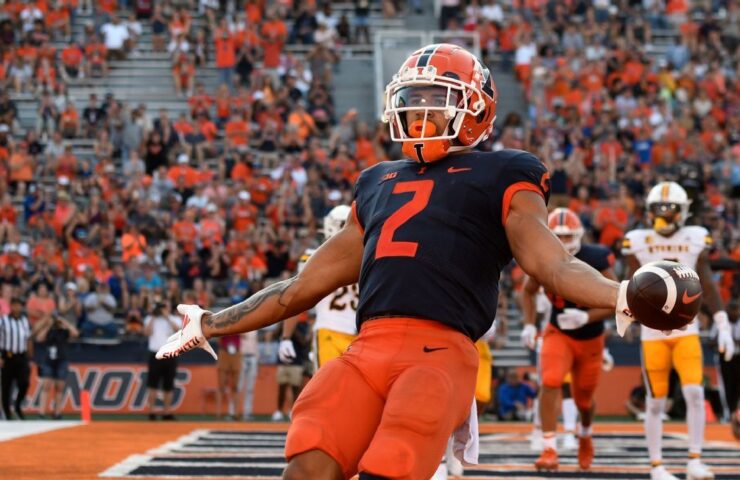 Illinois coach Bret Bielema stated Monday that junior running back Chase Brown is “trending in the ideal direction” ahead of the game Saturday at No. 3 Michigan.

“Really favorable and thrilled, but do not know where we’ll be by Friday for the trip and Saturday for the game,” Bielema said.Brown left in the

final minute of the 31-24 loss to Purdue on Saturday with a best leg injury.

With the Fighting Illini down 10 points and driving deep in Purdue territory, Brown took a 10-yard reception and fell awkwardly out of bounds as he was being tackled by linebacker OC Brothers. Brown had to be assisted back to the Illinois bench and couldn’t put any weight on the hurt leg.Brown is the nation’s leading rush, with 1,442 lawns, and he had 98 backyards and two ratings against the Boilermakers– snapping his 10-game streak of 100-yard rushing overalls going back to last season.He ended up being the second player in program

history to hurry for at least 3,000 profession backyards as he moved into 2nd place (3,008 )on the program’s all-time rushing list (Robert Holcombe; 4,105 from 1994 to’ 97). Bielema also revealed that sophomore cornerback Taz Nicholson will miss the remainder of the season with a wrist injury.”He had a quite substantial injury,”Bielema said of Nicholson.

“He dislocated his wrist and played a couple more plays after it was dislocated, which was incredible. … He had surgical treatment on Saturday throughout the course of the game. … He’ll have a second wave of surgical treatment. You’re looking at a timetable of four to six months for him. “Illinois (7-3, 4-3 Huge 10 )has dropped its previous two games– both at home– and is now in a four-way tie atop the Big Ten West.