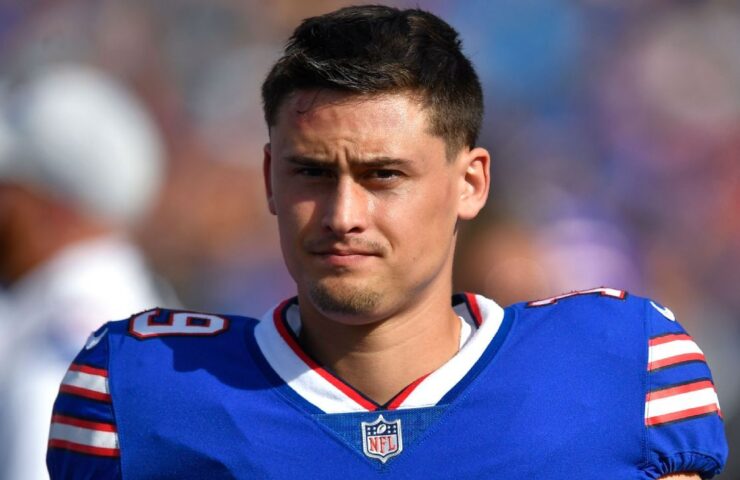 Former Buffalo Bills punter Matt Araiza and former teammates on the San Diego State football team will not face criminal charges in connection with an alleged gang rape of a minor that occurred at an off-campus party in October 2021, the San Diego County District Attorney’s Office announced Wednesday.

“Ultimately, prosecutors determined it is clear the evidence does not support the filing of criminal charges and there is no path to a potential criminal conviction,” the district attorney’s office said in a statement. “Prosecutors can only file charges when they ethically believe they can be proven beyond a reasonable doubt.”

The DA’s office said the San Diego Police Department did not recommend charges be filed when the case was submitted in early August.

The Bills released Araiza on Aug. 27, two days after a civil lawsuit was filed accusing him of having sex with a then-17-year-old high school senior, who was under the age of consent in California, outside an off-campus party held at his residence in the early morning of Oct. 17, 2021, when he was a member of the SDSU football team. The lawsuit states that Araiza, who was 21 at the time, then took her inside the home, where at least three other men, including the other two defendants named in the suit — Araiza’s then-Aztecs teammates Zavier Leonard and Nowlin Ewaliko — were located, and that she was repeatedly raped for about 1½ hours. An initial crime report obtained by ESPN said the girl sustained “severe black and blue bruising to her neck and throat region,” in addition to a half-inch laceration to her upper forehead. She had bruising on her right leg and noted “vaginal pain and bleeding from the incident.”

Araiza released a statement through his agency that read, “I am grateful that the District Attorney and the San Diego Police Department have discovered all the facts and found no criminal wrongdoing. I am excited to continue my NFL career.”

Leonard’s name was removed from the SDSU roster after the lawsuit was filed, and Ewaliko was not on the roster when training camp began.

“I am never surprised when a prosecutor does not file sexual assault charges when the victim was intoxicated,” the plaintiff’s attorney, Dan Gilleon, said in a statement. “It’s a very rare case where the criminal justice system achieves anything satisfactory for the victim in a sexual assault.

“The lawsuit we filed is not in the criminal justice system. … It is only in the civil system that a victim of sexual assault can achieve justice, and we plan to do just that.”

Gilleon said the suit is in the beginning stages.

Responding to the litigation, Araiza’s civil attorney, Dick Semerdjian, said in a statement, “Should the plaintiff continue in her civil case despite the District Attorney’s conclusion that there is ‘no path to a potential criminal conviction, we will vigorously defend the civil complaint against our client.”

According to the release from the DA’s office, sexual assault experts, including prosecutors and investigators, analyzed the evidence in the case, including over 35 taped witness interviews, the results of a Sexual Assault Response Team (SART) exam, DNA results and “forensic evidence from cell phones and video evidence of the incident itself.”

The DA’s office also said it “met with the young woman at the center of this case twice” and “worked with SDPD to conduct further investigation, which resulted in interviewing additional witnesses.”

San Diego State president Adela de la Torre said in a statement Wednesday that the school’s student conduct investigation is ongoing, after the university waited until it was cleared by San Diego police in July to proceed with its own investigation.

Araiza was drafted by the Bills in the sixth round of the 2022 NFL draft after helping SDSU to a school-best 12-2 season in his senior year.

Previous ArticleNCAA provides extra season to last-year UVA players
Next ArticleMaye back to UNC: ‘Might never ever leave this place’