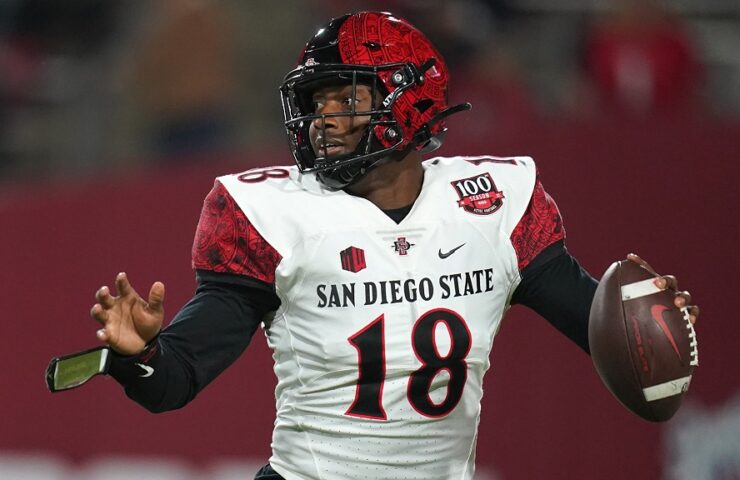 Air Force vs San Diego State How To Watch

Why Air Force Will Win

It came up with a late somewhat-miracle drive to beat Toledo back in September, and it collapsed after having Fresno State all but buried, and that’s been about it. San Jose State is about as close as it gets to a strong victory.

Now the offense that’s been able to perk up over the last month has to deal with a real defense.

Air Force leads the nation in time of possession with the offense giving the D a whole lot of rest. It shows – the defense is third in the nation allowing 263 yards per game.

The formula continues to be simple. Run, run some more, win third downs, let the defense stuff the run, and everything else works from there.

San Diego State does a lot of things right – for all the ripping on the lack of great wins, it was an onside kick recovery away from probably playing in the Mountain West title game – but it’s awful offensively on third downs.

That’s going to be a problem, but …

Why San Diego State Will Win

Can Air Force run on a defense that’s good?

It’s fun ground game might work on just about everyone, but it failed to get to 200 yards against Boise State and Wyoming – Air Force lost both of them.

It’s extremely simple. When Air Force runs for over 300 yards and dominates to the tempo, it’s 6-0 with six double-digit wins. When it doesn’t get to 300 it’s 2-3 with the two victories coming in low scoring fights with Army and Navy.

San Diego State’s defense had one really, really, really bad half against the run – it got ripped through by Boise State in a 35-13 loss. Other than that – giving up 316 rushing yards – it hasn’t allowed more than 175 yards to anyone else, and that includes Utah.

It hasn’t allowed more than 100 yards on the ground in four of the last five games.

Air Force is 6-1 at home and 2-2 away from Colorado Springs. The ground game will have its moments, but the defense will have to deal with a red-hot Jalen Mayden, a far more confident Aztec offense, and a run defense that will hold its own.

This will be a good battle between the two tough teams that need to control the clock. Mayden and the San Diego State passing game will be the difference.