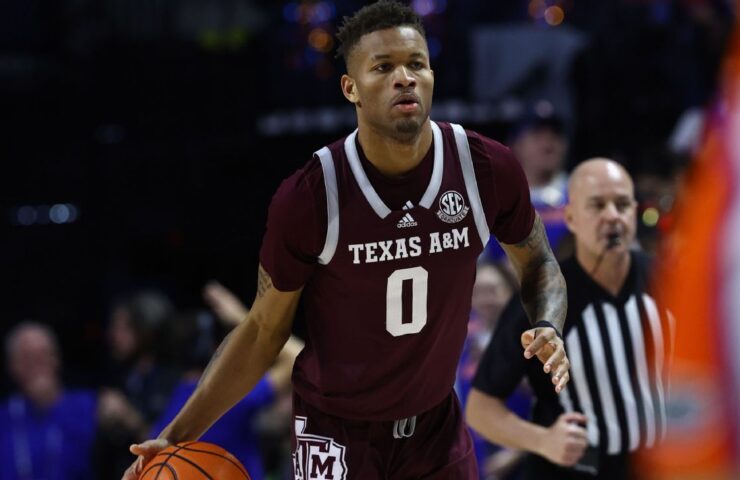 GAINESVILLE, Fla. — Texas A&M trailed before the opening tip at Florida, a scenario neither coach had experienced or even knew was a possibility before Wednesday night.

Shortly after leaving the court following final warmups, the Aggies realized managers had left their game jerseys at the team hotel. They double-timed it back to grab them, but officials hit them with a delay of game penalty — officially deemed an administrative technical foul — because the start had to be postponed a few minutes.

Florida guard Will Richard made the free throw for a 1-0 lead before the opening tip. The Gators (7-7) barely led again and lost 66-63 at home to drop to 0-2 in Southeastern Conference play for the second straight season. The Aggies (9-5, 1-0 SEC) won for the first time in six trips to Gainesville and gave Buzz Williams a victory in his 500th game as a head coach.

This one, though, will be remembered for that pregame point.

“I forgot the jerseys in my hotel room,” Williams said. “That’s probably the right way to say it because I used to be a manager. If that would have happened, my head coach would have stuck up for me. You don’t want the jerseys to get wrinkled so they hang them in my room, and I just forgot to put them on the bus.

“It’s my fault and it won’t happen again.”

His players, though, used the pregame hole, albeit the smallest one possible, as extra motivation. They quickly undressed Florida and led by as many 11 points in the opening 20 minutes. They also rallied down the stretch after the Gators tied the score at 63 thanks to Colin Castleton’s steal and layup.

“I think the jerseys were a big part of that,” said A&M’s Julius Marble, who finished with 17 points and six rebounds.

Marble said the team was willing to play in practice jerseys.

“It was an option. They were maroon,” Marble said. “We’re like, ‘Look, we’ll wear the practice jerseys. We’re underdogs. We’ll grind it out. We don’t care.'”

But how exactly did the ones that matter get left behind?

It was a negative for the Gators, who were admittedly confused when they came out of the locker room and saw no one on the visiting bench.

“I’m 37, I’ve played basketball my whole life and that’s never happened to me in an aspect or any point in my career,” Florida coach Todd Golden said. “It wasn’t ideal. I thought we were ready to go and we were sitting there maybe 15 or 20 minutes, waiting for these guys to show up. It is what it is. We didn’t handle the situation well enough.”

Technical fouls issued before college basketball games are rare but have happened.

Kansas State picked up a technical before its 2014 NCAA tournament game against Kentucky because a walk-on dunked during pregame warmups. North Florida got hit with a similar penalty during a regular-season game the following year. In June 2015, the NCAA abolished its rule that prohibited pregame dunking within 20 minutes of the opening tip. It’s unclear how many pregame techs, if any, have been issued since.

Golden couldn’t recall hearing about even one.

“It’s something that might happen at my son’s CYO [Catholic Youth Organization] game but usually not at the SEC level,” he quipped.

Previous ArticleLeading 25 junior Missi picks Baylor, ‘the best place’
Next Article“I’m not sure why people are so shocked”: coaches weigh