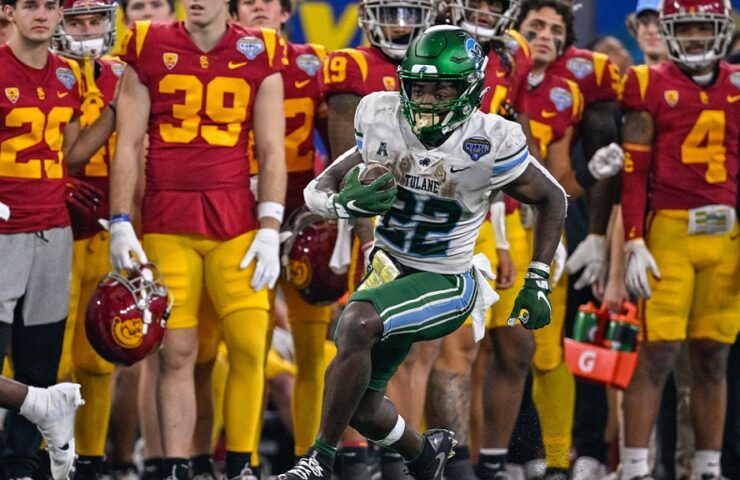 Who were the best and brightest stars of the 2022-2023 bowl season? Here are CFN’s 100 best players who stood out from the pack.

100 Best Players of the Bowl Season

Who were the best and brightest stars of the bowl season? Stats are nice, big moments are better, and overall level of play matters the most. Okay, that’s a lie – do something massive in the bowls and you get ranked higher.

There’s one more game to go – and it’s sort of a biggie – so a few more names will be added to this. Go ahead and add another 100 names that could be on this list, but before the College Football Playoff National Championship, here are the 100 best players of the bowl season.

While he didn’t take off to run much – just six yards on the ground – he kept the offense moving completing 23-of-30 passes for 205 yards and two touchdowns with a pick in the 28-27 win over North Carolina in the San Diego Country Credit Union Holiday Bowl.

Wyoming’s defense made a whole slew of big plays in the 30-27 overtime loss to Ohio in the Barstool Sports Arizona Bowl. Siders made six tackles – all six solo stops – with two sacks and three tackles for loss.

He wasn’t used much, but he made his touches count running seven times for 120 yards and two touchdowns – including an 87-yarder – and returned two kicks for 39 yards in the 35-21 win over Utah in the Rose Bowl.

This was supposed to be a wild shootout, but the defenses weren’t all that bad. Neither team generated much of a pass rush, but Trice did his part with a game-high two sacks and a team-tying six tackles in the 27-20 Valero Alamo Bowl win over Texas.

The Blue Devil defense was terrific in the 30-13 win over UCF in the Military Bowl, led by Dillon, who came up with a team-high nine tackles – six solo stops – with two sacks.

The senior did everything possible to keep Missouri in the game. Seven of his nine tackles were solo stops with 1.5 sacks and 2.5 tackles for loss in the 27-17 Union Home Mortgage Gasparilla Bowl loss to Wake Forest.

He lost a few battles, but he was a big part in the game’s momentum swing. He made two tackles with a key interception with four broken up passes in the Famous Idaho Potato Bowl win over San Jose State.

Star QB Michael Penix Jr. didn’t have hist best performance – even with 287 yards – but he was helped by a running game that wasn’t there for the other side. Taulapapa ran 14 times for 108 yards with a 42-yard touchdown dash in the 27-20 Valero Alamo Bowl win over Texas.

He made nine tackles with an interception in the 18-12 Duluth Trading Cure Bowl win over UTSA.

While he didn’t have top running Sean Tucker around, he was able to keep the offense moving through the air. There was a rough pick-six given up, but he completed 32-of-51 passes for 330 yards with that interception, and ran for 38 yards and two touchdowns in the 28-20 Bad Boy Mowers Pinstripe Bowl loss to Minnesota.

Other Demon Deacons got into the end zone – Taylor Morin scored twice, but Perry led the way with 11 catches for 116 yards in the 27-17 Union Home Mortgage Gasparilla Bowl win over Missouri.

Was he going to play? Was he heathy enough? He turned out to be just fine, running 22 times for 116 yards and a score in the 24-17 win over Oklahoma State in the Guaranteed Rate Bowl.

The quarterbacks might have been the stars of the show, but Dubinion did his part – as did AJ Green with 99 yards and a score – for a Hog running game that came close to running for 400 yards. He carried it 20 times for 112 yards and two scores and caught three passes for 19 yards in the 55-53 triple-overtime win over Kansas.

The game was effectively over by the time he went to work, but he still played a big role. He caught nine passes for 163 yards and a score, and he completed both of his passes for 50 yards and a score in the 63-7 win over Purdue in the Cheez-It Citrus Bowl.

Very, very efficient, he did everything he was supposed to hitting 16-of-21 passes for 279 yards and two touchdowns – averaging over 13 yards per pass – in the 35-21 win over Utah in the Rose Bowl.

He only caught three passes, but they went for 129 yards with his 76-yard touchdown bringing Georgia close late in the 42-41 loss to Georgia in the College Football Playoff Semifinal Chick-fil-A Peach Bowl.

No, he didn’t make the splashiest defensive plays like some of his teammates did, but he came up with a game-high 11 tackles with a sack and five solo stops in the 45-38 loss to Notre Dame in the TaxSlayer Gator Bowl.

There wasn’t anything fun about the game, but that’s partly because the Iowa defense was so dominant. Campbell had a game-high ten stop with a sack and two tackles for loss in the 21-0 TransPerfect Music City Bowl win over Kentucky.

The quarterbacks were the headliners, but the running back took over. Irving ran 13 times for 149 yards and two scores in the 28-27 win over North Carolina in the San Diego Country Credit Union Holiday Bowl.

QB Holton Ahlers and the passing game were the stars in the 53-29 win over Coastal Carolina in the TicketSmarter Birmingham Bowl, but Mitchell was a steady force running 22 times for 127 yards and a score.

The Georgia Southern offense was supposed to explode, but it was the Buffalo passing attack that brought it home. Marshall caught 11 passes for 127 yards and a score, setting the tone early with his 32-yard touchdown grab in UB’s 23-21 win in the Camellia Bowl.

He missed one, but he hit a 49-yarder to go along with the game-winning 37-yarder with just over two minutes to play. He saved the offense making four of five field goal tries in  the 25-23 win over San Diego State in the EasyPost Hawaii Bowl.

– How good were the bowls? Ranking bowls so far from best to worst

In a losing cause, Cordeiro threw two big picks, but he connected on 26-of-44 passes for 366 yards and three touchdowns and ran nine times for 50 yards and a score in the 41-27 loss to Eastern Michigan in the Famous Idaho Potato Bowl.

A key part of the dominant Hawkeye defensive performance, he made seven tackles with a tackle for loss, a 14-yard pick six, and returned three punts for 34 yards in the 21-0 TransPerfect Music City Bowl win over Kentucky.

The Tigers put this away fast thanks to Daniels. He completed 12-of-17 passes for 139 yards and a score, ran six times for a team-high 67 yards, and caught a five-yard touchdown pass in the 63-7 win over Purdue in the Cheez-It Citrus Bowl.