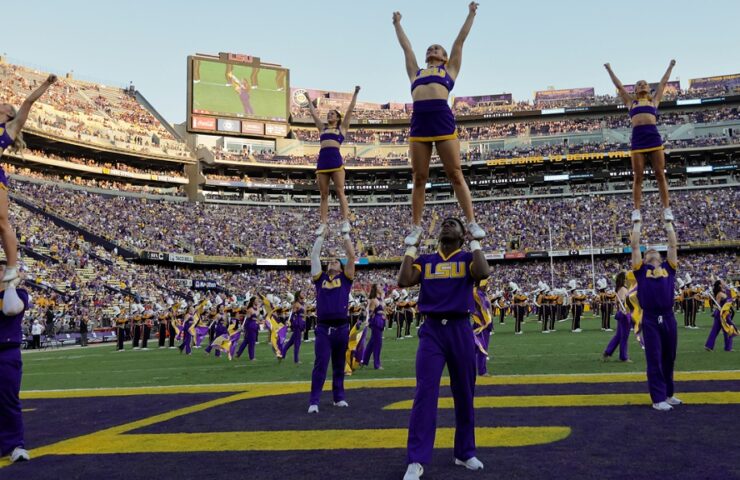 10 best predictions for this week’s college football slate. What games appear to be the best bets and best picks for the Week 12 games?

A few weeks left and then it’s bowl time, and then I’ll crank it up for NFL – which I’ve shockingly been stronger at this year – and maybe college basketball.

The theme for this week is a simple one that could come back to embarrass me in a big, big way.

My Power Five snobbery is coming out in full force.

I have NOTHING against the Group of Five programs. I love them all. I’m knee-deep in the Mountain West for a variety of reasons, and no one enjoys MACtion more than I do.

Here’s the problem. Now, more than ever, it’s just so hard for the Group of Five programs to hang with the Power Fives thanks to expansion – that’s going to gut the Gof5er conferences over the next few years – the transfer portal, and the difference in resources.

That doesn’t mean we won’t get the occasional Marshall over Notre Dame or Eastern Michigan over Arizona State or Georgia Southern over Nebraska. However, when it comes to picking games between the Power Fives vs. the Group of Fives, the big programs win a whole lot more than you think.

And then there’s this time of year.

It’s one thing when the Group of Fives come up with a stunner early in the season. But at this point it’s a wee bit easier to figure it all out – at least in theory.

Some Power Five programs use the Group of Five game for Senior Day – a paycheck game to make all the fans happy in the final home game. Some need this to improve bowl position, or to get ready for the big rivalry game coming up, or to get shot to stretch the legs a little in a supposedly winnable matchup.

Am I going with all the Power Fives over Group of Fives? I’m not touching Virginia Tech vs Liberty, but you’ll get the idea with the other picks.

But first we start with a tried and true bit that worked out just fine last week.

If you’ve been a part of the program from the start you know what I”m going to say, but for those new to the bit …

If the world gives you a college football total of 70 or more, you say “thank you,” take the under, and move on.

It’s SO hard to get there – any number of things could happen – and over the long haul you’ll hit more than you’ll miss. If it goes over you tip your hat and enjoy the show of offense.

Do I always buy into the bullspit I’m slinging? Obviously not since the pick on the site predicts a shootout, but again, do the same thing every time and you should – if all goes right – be ahead.

Need proof? Welcome to last week. I thought all four of these could’ve and should’ve blown past the total, but …

Washington and Oregon was a terrific offensive thriller – Washington 37-34 (71). The point total was 72.5. And finally …

SMU vs USF. It was 72.5, and everyone wanted in after the historic 77-63 SMU win over Houston the week before.

75.5 is a TON of points or the Trojans and Bruins. Root for the over as a fan, even if it doesn’t happen.

Now to the Power Five vs Group of Five theme. Fully prepared to eat it if this doesn’t go right – but it’s not like you’ll be able to hammer me on Twitter for it … maybe.

The theory? Auburn is having a bad year, it’s having fun under interim head coach Cadillac Williams, and it’s going to bust it in the final home game of the season with a chance to make it two wins in a row before going to Alabama.

And yeah, there’s still a shot at getting bowl eligible by winning the final two games.

Auburn struggled at home against San Jose State 24-16, but as it turns out, that team from the Mountain West is pretty good. It rocked Mercer 42-16, and that was it for the easy games.

WKU lost to a horrible Indiana 33-30 in the one Power Five meeting. It’s run defense has suddenly become porous, it’s 1-3 against the four likely bowl-bound teams on the slate, and the Auburn pass defense is okay.

And it’s the SEC at home against a Group of Five program. To continue the snob-fest …

Normally I wouldn’t touch this.

The highly favored SEC team would go through the motions, make sure no one is hurt, get the 2s and 3s out there, and cruise to get ready for the showdown against LSU.

Start with this. UMass might not score, and if it does, it’s probably not coming up with more than ten.

This is the first game this year against a Power Five program for the Minutemen. It lost by 45 to Toledo and 32 against Tulane, and now it’s about to deal with a team that needs a rainbow.

Texas A&M took it relatively easy in a 31-0 win over Sam Houston State, and it lost to Appalachian State 17-14. After losing six straight, though, look out.

Speaking of beating UMass by double-digits, like New Mexico State did …

66-7. The Wisconsin thing isn’t working against anyone, but it sure as shoot was just fine in the win over them in mid-September.

New Mexico State hasn’t been awful, and it’s actually coming into this on a three game winning streak. Insanely enough, if it beats Missouri and beats Liberty, it’ll be bowl eligible.

Okay, so Mizzou’s 52-24 win over Louisiana Tech was a little worrisome, and only beating Abilene Christian 34-17 isn’t right, but the team is coming off a two game losing streak. It needs this and has to beat Arkansas next week to get to a bowl game.

The D will pitch a gem.

I’ll admit that I’m getting a bit theoretical here than dealing with anything concrete.

As a team, LSU is going to block out the noise, focus on the game at hand, and deal with Texas A&M next week and Georgia the week after for the SEC Championship. However, trust me, they’re hearing it about the College Football Playoff and the possibilities if it wins out.

As is it’s going to be an uphill climb just to win the last two games to be in the discussion. Even if LSU does that, it still needs to look the part – this can’t be a squeaker at this point.

1. Night game. LSU is a different football program after dark.

3. Liberty. UTSA. Maybe WKU. Those are the best teams UAB has faced so far – it has yet to deal with a Power Five program.

NEXT: College Football Pick Against the Spread No. 5: Texas at Kansas