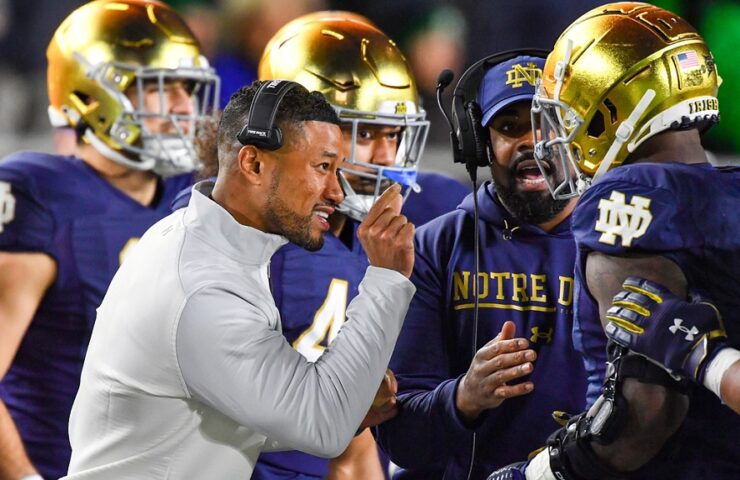 10 best predictions for this week’s college football slate. What games appear to be the best bets and best picks for the Week 11 games?

This is a strangely odd week.

It’s not like there are a slew massive world-change games like we got in Week 10 – I want nothing to do with TCU vs Texas against the spread; more on that later on – and now we get into the bizarre finishing kick where we lose control.

Everything we know, every pattern, and every trend now has to take into account Senior Day – Georgia Tech hosting Miami this week for that, by the way – when emotions run high and teams usually play at another level.

We’re also entering the portion of the program when teams locked into a losing season have no more Fs to give and end up throwing that interesting freshman quarterback into the mix. Maybe teams play differently when the pressure is off, or maybe a coach comes up with something special to avoid being fired, or …

Yeah, I know, the picks.

And I do apologize in advance tor all you who just want the against the spread calls  and aren’t interested in the seemingly safer point totals for some of the key games this week.

Fortunately for me, Twitter might be gone by the time you read this, so feel free to shake your fist in anger and assume the message will be received.

So with that, we start out with a point total pick I don’t actually believe in.

This is me trying to be an adult.

It’s North Carolina vs Wake Forest. These two put on a 58-55 show last year in a Tar Heel win, and the two have the offenses to do it all again.

North Carolina is all O and no D, but its games aren’t getting that far out of control. The Appalachian State game got to 124, the Notre Dame battle rolled up 78, and Wake Forest hands out 40 points a game like Halloween candy.

It’s a primetime game that I actually think will be plays in the 40s on both sides, but …

A man is nothing without his principles. If you’re a regular around these parts, you know what I’m going to say …

If the world is giving you a college total of 70 or more, you go under – TOO many things can go wrong – and if you don’t win, enjoy the show.

None of the last five North Carolina games have hit 78.

With ALL of that hoo-ha just spouted …

Again, I actually like the over on the North Carolina-Wake Forest game, but I couldn’t do it. I have to stick to what I believe. Do the same thing every time, and over the long haul you’ll be ahead.

Stuff goes up, stuff goes down, but if you do things the right way, eat plenty of fiber, tip 20%, and let that guy with all the creepy political stickers merge into your lane, everything will work out just fine.

That includes always taking the under on a college point total of 70 or more.

Don’t think you know something, and don’t go with your gut – you ALWAYS go under on a college point total of 70 or more …

I can’t. It would be wrong to suggest doing that here.

Arizona will score between 31 and 39 points. How dow we know this? It did that in six of the nine games so far, and UCLA has allowed 32 points or more in four of the last five games.

One more point total and then I’ll get into the ATS side of things.

I was originally going with Indiana getting 40.5 here, but the line moved to 39.5. That shouldn’t have mattered, but all of a sudden I had visions of a 52-10 Ohio State win just as much as I could see a 44-3 victory.

Either way, I get the sense that Ohio State is a tad salty after last week’s 21-7 win over Northwestern.

The weather was miserable, the wind was around 50 mph – I know, I was in it in the greater Chicago area on Saturday – and there wasn’t any passing game. Even so, you could tell all week that CJ Stroud and company want to stretch their legs a bit after that.

This won’t be 77-21 like the Buckeye win over Toledo, but the home side should be able to take care of almost all of the heavy lifting itself.

Sort of like the Indiana-Ohio State game, this one seems like we should be able to figure it out based on the spread and the point total.

The Falcons are favored by 21.5 at home and the point total is 37.5. That seems about right considering New Mexico has scored 14 points or fewer in six of its nine games. Here’s where this tilts.

Air Force has scored fewer than 27 points four times – 14 against Wyoming and Boise State, and 13 against Army and Navy. Boise State’s defense is great, Wyoming and Army were away from Fort Collins, and Navy games vs other service academies are low scoring.

At home, Air Force host up 41 or more against three mediocre teams at the same level as the Lobos. That, and New Mexico only faced two decent running teams so far and got rolled for over 200 yards in blowout losses to LSU (38-0) and Fresno State (41-9).

I’m not going to lie and pretend there’s any better insight to this that isn’t written up in the game preview, and even then it basically comes down to this.

Alabama was having problems with Arkansas for three quarters before everything turned in fourth quarter of the 49-26 win, but that was SHAKY.

Tennessee? It probably should’ve been a win, but wasn’t, and didn’t cover.

LSU? It probably should’ve been a win, but wasn’t, and didn’t cover. Both Tennessee and LSU came though ATS.

It’s Alabama. It could win 45-3 and you wouldn’t blink, but if you’re giving me a double-digit home dog as good as Ole Miss, fine – it’s the revival of DDHD bit that crushed so hard for three weeks 20 years ago in this piece …

NEXT: College Football Pick Against the Spread No. 5: Boise State at Nevada