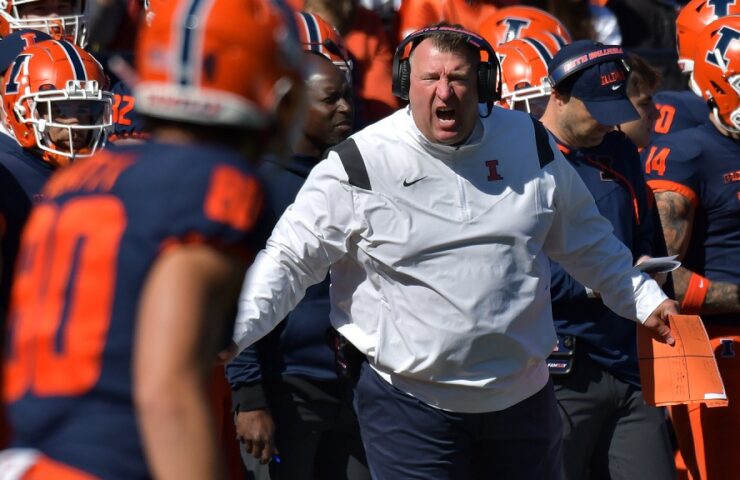 Illinois vs Mississippi State How To Watch

– It’s the first game of 2023, and it’s the first game for Mississippi State without the late head coach Mike Leach. Overall this was a solid season under Leach with wins in three of the last four games – including a win over arch-rival Ole Miss – on the way to a good 2023 bowl game, but of course the season and this game will be remembered for Leach.

Nothing is going to immediately change under new head coach Zach Arnett. The Bulldogs are still going to throw the ball a bajillion times, the defense is going to be solid, and the team should be able to handle the Illinois style.

– Illinois was one of the 2022 season’s best surprises. Under head coach Bret Bielema, the offense was tough up front, the defense was among the best in the country, and it all worked well enough to destroy Wisconsin – and end the Paul Chryst era – beat Iowa, and push Michigan to the brink. It was a rough finishing kick with losses to Michigan State and Purdue keeping it out of Big Ten Championship, but this season was just the beginning of a strong new era of Illinois football.

Here’s the problem. It’s missing some of its key stars. Chase Brown was as good as any running back in the country, Luke Ford was a terrific tight end, and the opt-out losses in the secondary against this passing team is devastating.

– This is the first bowl game for Illinois since losing the 2019 Redbox to Cal. The last bowl win was against UCLA in the 2011 Kraft Fight Hunger, and the program is a rough 2-4 in bowls since 1999’s blowout win over Virginia in the Micron PC. Bielema has been decent in bowls – he went 2-1 at Arkansas – but he was just 2-4 at Wisconsin with two straight Rose Bowl losses before leaving for the Hog gig.

– Mississippi State was terrific in bowls games for a long stretch – going 9-2 in 11 bowls from the 1999 Peach up to the end of the Dan Mullen era with a win over Louisville in the 2017 TaxSlayer. Under Joe Moorhead and Mike Leach, the Bulldogs went 1-3, getting rocked by Texas Tech 34-7 last year in the Liberty.

– It’s the inaugural ReliaQuest Bowl, but you probably know it better as the old Outback Bowl. It’s been SEC vs Big Ten after Wisconsin beat Duke in 1995 with the SEC going 16-10 and winning the last two. Last year’s 24-10 Arkansas win over Penn State was better than the final score, and the previous five were all decided by one score.

Why Illinois Will Win The ReliaQuest Bowl

The defense really is that good.

It might be missing a few very, very important defensive backs – more on that in a moment – but the style and the D should still work. The Illini finished second in the nation in total defense behind Air Force, it was first in scoring defense allowing just 12.2 points per game, and most importantly in this, it’s No. 1 in the nation in passing efficiency defense.

The defense allowed fewer than 2,000 yards this season and just eight touchdowns, and it picked off 22 passes. No, the team didn’t face a slew of high-powered passing teams, but the losses mostly came against teams that could throw.

There’s one massive difference between what Indiana, Michigan State, and Purdue did in their three wins and what Mississippi State does – downfield passes.

The Bulldogs will throw it 50 times, but there’s no rushing yards, and there’s nothing happening when it comes to the deep shots. The passing game averages under ten yards per completion – the third-lowest in college football – meaning the Illini will allow short passes, and then have to make the tackle. They can do that.

Why Mississippi State Will Win The ReliaQuest Bowl

CB Devon Witherspoon and S Sydney Brown. Those are two NFL starting defensive backs Illinois won’t have around, and it’s going to matter.

The Illini defense will hold its own. Mississippi State will have a hard time moving the chains, it’ll have to deal with a ton of third down moments, and Illinois is as good as anyone in the country at coming up with third down stops. But the new parts in the Illinois secondary will hurt just enough to allow Will Rogers and company to keep things moving.

Yes, Illinois, Michigan State, and Purdue were able to stretch the field a bit, but none of them were Tennessee when it came to winging it around. Illinois lost four games this year, going 0-3 when giving up 208 yards or more, and the fourth loss came to Michigan State, who completed 66% of its passes – the best completion day by anyone against Illinois.

Previous ArticleHow Clemson and K
Next ArticleNo pressure for Smart: ‘Standard does not change’