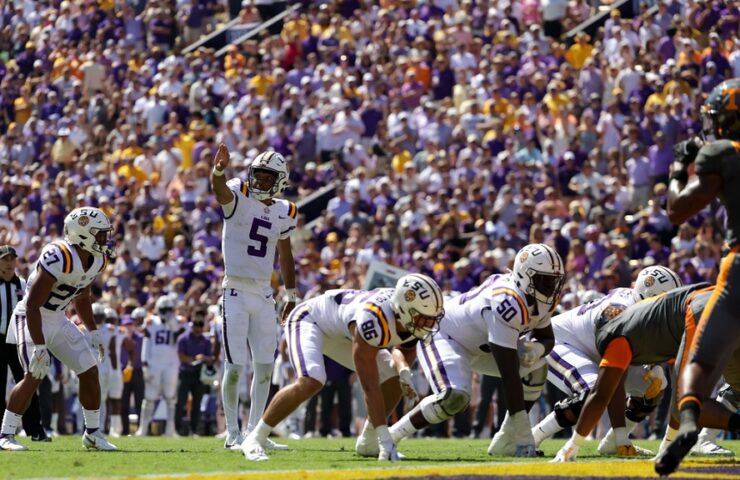 Reaction after the third round of College Football Playoff rankings. What to take away from the latest top 25.

DO … NOT … FALL FOR IT. This happens every year around this time, including by many who know better.

Just because Tennessee is at 5, it doesn’t automatically move into the top four after (2) Ohio State and (3) Michigan play. That’s not how this works.

That hasn’t been how the College Football Playoff committee has rolled ever since TCU was at 3 going into the final 2014 rankings, ripped through Iowa State, and got dropped to 6 because …

Until the College Football Playoff changes its precedent, this has to be reiterated over and over and over again since too many blow it off. Did you win your Power Five conference championship, and did you go 12-1 or 13-0 doing it?

At some point the committee will choose a team that didn’t win its conference championship over one with the established criteria. Until then, assume the formula holds.

– How do the 9 teams still alive for the CFP rank?

But Tennessee really does belong in the top four. Did Ohio State have to play at Georgia? Did Michigan? Did TCU? No? So Tennessee’s only sin is that it had to play on the road against the current No. 1 team in America.

Does Ohio State, Michigan, or TCU have a win anywhere close to as strong – at least technically – as Tennessee’s 40-13 stomping of (6) LSU on the road? No? Then you have your answer. BUT …

Here’s your College Football Playoff meltdown: LSU wins out. You CAN’T put in 2 SEC teams and not the conference champion … can you?

You CAN’T leave out 11-1 Tennessee with that win over LSU on the resumé … can you?

You CAN’T put in three SEC teams … can you?

The problem is that you’re not wrong if the answer is “yes” to any or all of those three.

Read what the College Football Playoff committee is telling you. USC at 7. Utah at 10. Oregon at 12. UCLA at 16. Washington at 17. Oregon State at 23. And with Notre Dame moving up …

Remember the three things that matter over the last few weeks – schedule, schedule, and schedule. If USC closes out with wins over UCLA, Notre Dame, and let’s say Oregon, then no way, no how, no chance is the 12-1 Pac-12 champion left out.

Because I keep getting asked this on every radio/online hit, forgive me for repeating myself in every piece I do on the College Football Playoff. No way, no how, NO CHANCE is a 13-0 Big 12 champion TCU left out.

Yes, the College Football Playoff’s bacon would be saved if USC and the ACC champion are 12-1. Either they both get in if TCU loses the Big 12 championship, or one is left out along with Tennessee.

Of course, there’s going to be a curveball. Just a guess, but 12-1 TCU that doesn’t win the Big 12 championship probably goes to the bottom of the pile and behind 11-1 Tennessee.

Sorry. Back to this week’s round of College Football Playoff rankings.

North Carolina needs to be taken more seriously. It’s 9-1 and ranked 13th, but it doesn’t have an amazing win. However, it beat Pitt 42-24 – Pitt took Tennessee to overtime. If it beats (24) NC State and takes down (9) Clemson to be the 12-1 ACC champion, it’s going to be in the top four discussion.

Minnesota should be in the top 25. If the committee did its homework, it would know that injuries are why the Gophers got whacked at home against Purdue, and the losses on the road to Illinois and Penn State aren’t that bad.

Oregon State deserves a LOT more love than 23. The loss to USC was 17-14 in the final moments, the 24-21 loss at Washington is acceptable, and getting rocked at Utah is okay. Beating Boise State and Fresno State look pretty good now.

Ole Miss at 14 is a gift. its best win so far was against … um … uhhhh … Troy? It’s Kentucky, but there isn’t a win over a College Football Playoff top 25 team.

You could put Notre Dame anywhere from 15 to 25 and you probably wouldn’t be wrong. 20 is fine, but usually the committee likes big wins (giving North Carolina and Clemson their only losses) over brutal losses (Marshall, Stanford).

What has Oklahoma State done to be 23? Can we all agree now that beating Texas isn’t a big deal? Slinking by Iowa State 20-14 shouldn’t have been enough to overcome the ugly losses to Kansas and Kansas State to get into the top 25.

– Bowl Eligibility: Where does every team stand?

Washington is going to be kicking itself all offseason for that unfocused 45-38 loss at Arizona State back in early October. It pulls that out, and it’s in a position to get to the Pac-12 Championship at 11-1 with a shot at the CFP.

I’m not exactly sure what (25) Cincinnati did to earn a top 25 spot, but okay, whatever. Beating SMU and East Carolina wasn’t anything special.

I can’t change the future, I can only see it … What’s it going to be at the end of all this fun?