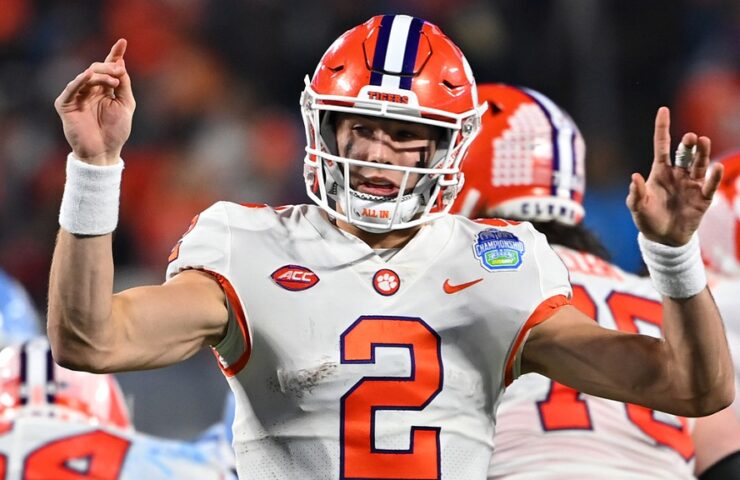 Clemson vs Tennessee How To Watch

Clemson vs Tennessee Capital One Orange Bowl 5 Things To Know

– This would’ve been so awesome if everyone was in place in a College Football Playoff game between these two. As is it should be extremely entertaining.

It’s not just the Tennessee had a breakthrough season under head coach Josh Heupel. It’s that it showed just how explosive and fun it’s going to be for a long, long time.

It beat Bama, blew out LSU, and wasn’t totally awful in the loss to Georgia. Losing to South Carolina was bad, losing star QB Hendon Hooker to a knee injury was worse, but getting to the Orange Bowl is still a magnificent way to finish up the season.

There’s no Jalin Hyatt – the nation’s best receiver is getting ready for the NFL – and receiving mate Cedric Tillman is joining him, but the offense should still work and the defense is relatively intact.

– Clemson also gets back a ton of future NFL stars, especially on the offensive front. QB DJ Uiagalelei is gone to Oregon State, and losing pass rusher Myles Murphy and LB Trenton Simpson hurts, but this is QB Cade Klubnik’s offense to run and the next level would love to have the Tiger starting front four on D.

The Tigers would’ve been in the College Football Playoff had they beaten South Carolina – yeah, the CFP would’ve gone with a 12-1 ACC Champion over TCU and/or Ohio State.

Considering they way they buckled against the Gamecocks and got run over by Notre Dame, this – even more than the blowout over North Carolina in the ACC Championship – is the biggest moment for this year’s team. This will define the 2022 season narrative.

– Dabo Swinney is amazing in bowl games. He lost his first two at Clemson – one of them was the 70-33 epic to West Virginia in the 2012 Orange – and has been 10-4 since with two of the losses coming in College Football Playoff National Championships and two others in CFP semifinals.

– Tennessee won four straight bowls before dropping last year’s amazing 47-45 Music City to Purdue. Head coach Josh Heupel is 1-3 in bowl games – he was 1-2 at UCF before last year’s controversial loss with the Vols. The guy knows the Orange Bowl, though. He was the starting quarterback for Oklahoma in the 13-2 2001 BCS Championship win over Florida State.

– The Orange Bowl has been wildly hit-or-miss. It was a dog as a College Football Playoff semifinal last year – a 34-11 Georgia win over Michigan that was over after a few drives.

Going all the way back to 1996, 19 of the last 26 have been decided by double-digits. That’s totally misleading – there were some classics in there – but the bowl deserves something wild. This might be it.

Why Clemson Will Win The Capital One Orange Bowl

If you want the Cade Klubnik national breakout party to begin – America’s attention wasn’t exactly on the ACC Championship when the Big Ten title game was going on at the same time – here you go.

DJ Uiagalelei struggled against North Carolina, Swinney made the call right away and put in Klubnik, and …. boom. 20-of-24 for 279 yards and a touchdown in the blowout.

Now he gets the Tennessee secondary.

At some point this year the Vols were going to pay for their problems on defense. Florida’s Anthony Richardson rolled for over 450 yards, Georgia’s Stetson Bennett had an efficient day in a win, and ol’ Bryce Young came up with 455 yards and was a Jahmyr Gibbs drop away from Bama probably winning in Knoxville.

But it was South Carolina’s Spencer Rattler who went totally bonkers with 438 yards and six touchdowns – and, most shockingly for him, no picks – in the 63-38 win.

Now it should be Klubnik’s turn against the fifth-worst pass defense in the country. That, and the ball control aspect to this game should matter.

Clemson doesn’t dominate the clock, but it should have the ball for at close to 35 minutes, mainly because Tennessee doesn’t care a lick about time of possession and was dead last in the nation at it.

Why Tennessee Will Win The Capital One Orange Bowl

For all the talent and all the NFL star power on the Clemson defense, it wasn’t all that hard to move the ball on this bunch.

Wake Forest did it through the air, Notre Dame did it on the ground, Florida State did it however it wanted to, and Spencer Rattler had himself a day against the Tigers right after he disposed of the Vols.

Oh sure, the superstars up front can get into the backfield and be disruptive, and the overall stats are fine, but for Tennessee it’s going to be about cranking up the running game for over five yards per carry and getting a monster day out of Joe Milton.

The former Michigan quarterback got the start for Josh Heupel last year, but he was quickly replaced by Hendon Hooker. Thrown into a tough spot when Hooker went down, Milton wasn’t bad with a few deep plays in the loss to South Carolina and was just fine in the blowout over Vanderbilt.

The spotlight will be on Klubnik. Milton has the arm and enough experience to be okay, but as long as he can get things moving with his legs along with his arm, and if the running backs can help the cause, the offense will keep moving.