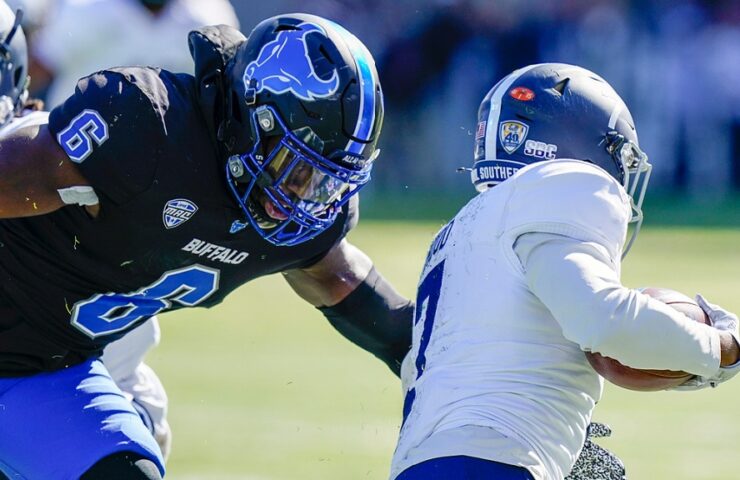 Buffalo beat Georgia Southern to win the Camellia Bowl. What happened, who was the player of the game, and what does it all mean?

Buffalo 23, Georgia Southern 21 Camellia Bowl What Happened, Player of the Game, What It All Means

– Buffalo was able to keep the chains moving, was up 14-6 at halftime, and pushed past in the second half with three Alex McNulty field goals to take a late lead. Cole Snyder found Justin Marshall for a 32-ard touchdown pass in the first half, Tajay Ahmed ran for a score, and McNulty was the offense from there.

– Georgia Southern couldn’t stop screwing up. It had chance after chance after chance to come up with takeaways and third down stops, but couldn’t do it. The D was able to hold firm in the second half and force field goals instead of touchdowns, but it still wasn’t enough.

– Georgia Southern QB Kyle Vantrease – a former Buffalo transfer – threw for 352 yards and two touchdown passes including a 79-yarder to Joshua Thompson on the first drive of the second half. He led the way on a late 90-yard touchdown drive to get within two, but UB was able to close it out.

Camellia Bowl Player of the Game

Justin Marshall, WR Buffalo
He caught 11 passes for 127 yards and a 32-yard touchdown.

Camellia Bowl What It All Means

Buffalo was crashing hard. It lost three straight and needed to slip past Akron in a rescheduled game just to get here. It came into this with a great gameplan, it got physical, and now the program has its third bowl win in four seasons. With the win, it’s a winning season in the second year under head coach Maurice Linguist. Finishing 7-6, UB has just one losing season since 2016.

This was a maddening way for Georgia Southern to end what was a strong first year under Clay Helton. It put itself in a position to win the game, but it couldn’t force the big plays or big stops defensively, and the offense couldn’t do anything to control the clock. With the loss, the program now has its second losing season in a row after three straight winning campaigns. In the nine years in the FBS it was 3-1 in bowls before this. Now it lost two of its last three.